Average Rating : 4.24
Total Vote(s) : 21
Please rate this song between 1 star and 5 stars (5 stars being the best). Just move your mouse on the stars above and click as per your rating. Your rating will really help us to improve our website. 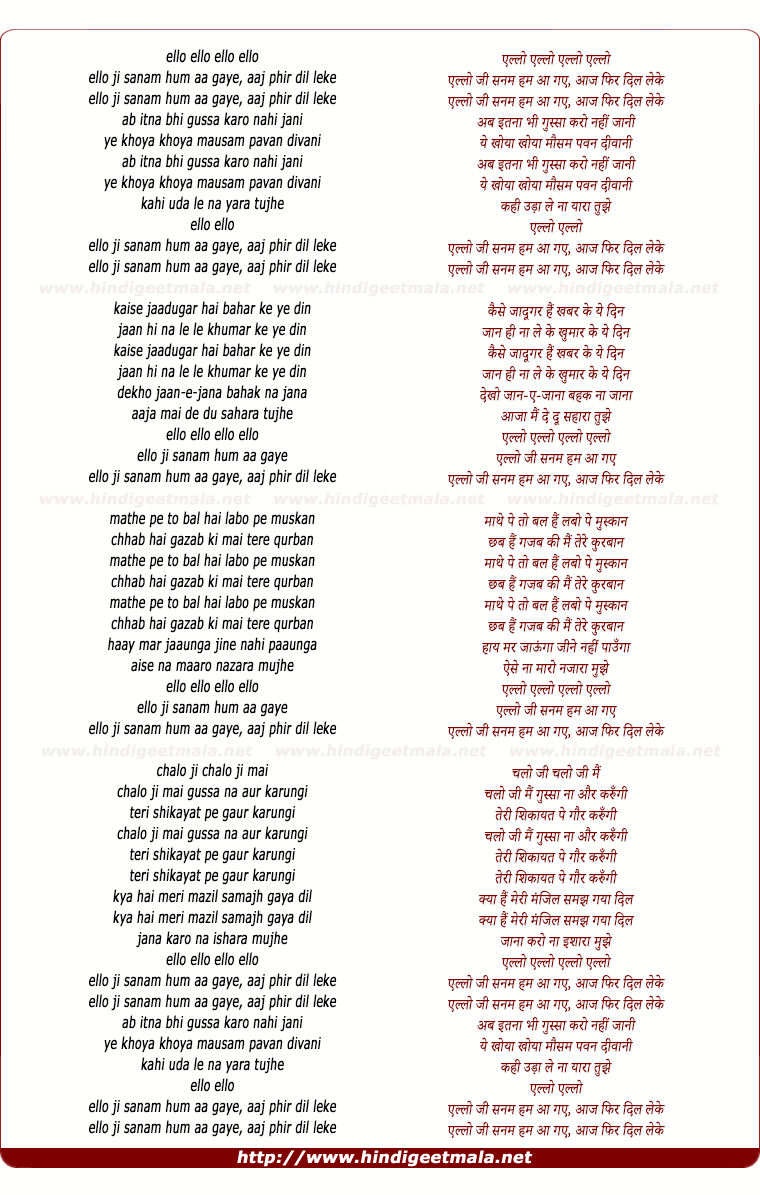 Comments on song "Ello Ji Sanam Hum Aa Gaye"
Faiz Ahmed Faiz on Saturday, May 17, 2014
i dont know if this info is known, if you feel O P Nayyar effect in this
song, please note, the composer made it a tribute to Sir O P Nayyar.
O P Nayyar, my most fav music director ever, thus remain as the only MD to
whom a film, or its music, has been dedicated.
The same effect can be seen in other songs of this film as well.The tune,
the instrumentation, even choosing a Rafi-ish singer, the hoofbeat,
everything only to The O P Nayyar.﻿

Shams Puri on Monday, June 08, 2015
This musical and visual composition featured in Andaz Apna Apna attempts to
revive that nostalgic feeling of the 60s. The song depicts some of the
features of O.P. Nayar's style of music, Even the singers voices might
somewhat suggest that they were inspired by the voices of Mohd Rafi and
Geeta Dutt. This whole piece of work is indeed a stroke of genius.﻿

Mohit Kumar Saini on Saturday, April 19, 2014
This song is legendary..so underrated movie and song...
Aamir and Raveena are just so out of the world..
The whole movie is a Aamir masterclass..
Truly he is way ahead of other Bollywood actors..he was always a
perfectionist...﻿

eclecticme7 on Saturday, May 04, 2013
akshay said in an interview tat he married twinkle coz she is more
beautiful then raveena n shilpa.cheap guy who goes only for looks n
ditched raveena n shilpa who are more good looking n better actress then
twinkle khanna...n akshay is a cheap playboy wonder why ppl like
him...morally he is not a nice person.

Zooni Raina on Sunday, January 20, 2013
Can't believe Akshay left Raveena and married Twinkle. She is 100 %
beautiful than Twinkle. And a better human being too. Raveena always had
this nice attitude.