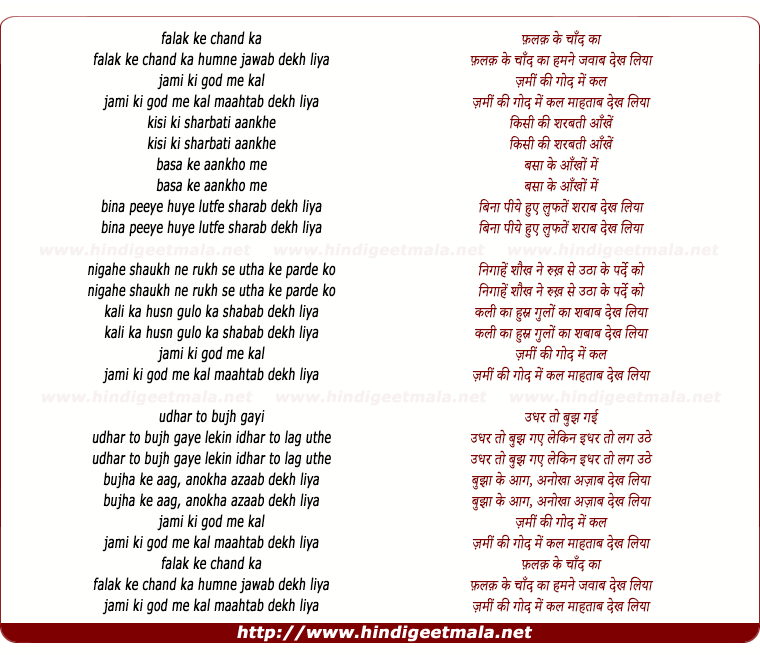 Comments on song "Falaq Ke Chaand Kaa Hamane Jawaab Dekh Liyaa"
Colonel Rao on Monday, January 09, 2012
Excellent song by stalwart GM Durrani sahib. He was the guiding spirit to
Rafi sahib and the fan went past the master. in days to come. GMD gave us a
treasure of songs that is our heritage. His duet in Shair with Lata was a
master piece and became a great hit. He was great versatile singer and
could sing comic songs too. His Galibs songs were excellent .

RealMusicKing on Saturday, December 17, 2011
Song Neend Hamari Khwab Tumhare is also available YouTube G.M. Durrani singing Live. Also listen to his Hazaron Khwahishein Aesi Ke Har Khwahish Pe Dam Nikle".
TorontoLiving on Sunday, December 19, 2010
Dear friends... I am so thankful to you for posting this song on YouTube.
It's so nostalgic for me because the singer Mr. G M Durrani was my maternal
grand father who passed away in 1990. I loved him dearly. Though I got to
spend very little time together, but I know he was a great man. Humble,
sensitive and very quite. A great musician and a great father. May God
bless his soul. I wish he had lived a little longer and had spent some more
time with us!! Now almost 20 years after his death, i


Madhavi Sharma on Thursday, July 22, 2010
Vow... Nice to see this on youtube. My Nana is the Music Director of this
film. Yes, S K Desai is my Nanaji(Maternal Grandfather). His full name is
Shri Shanti Kumar Desai... Thanks Ajayuv, for uploading this video.