Video of this song from youtube
Average Rating : 4.59
Total Vote(s) : 122
Please rate this song between 1 star and 5 stars (5 stars being the best). Just move your mouse on the stars above and click as per your rating. Your rating will really help us to improve our website. 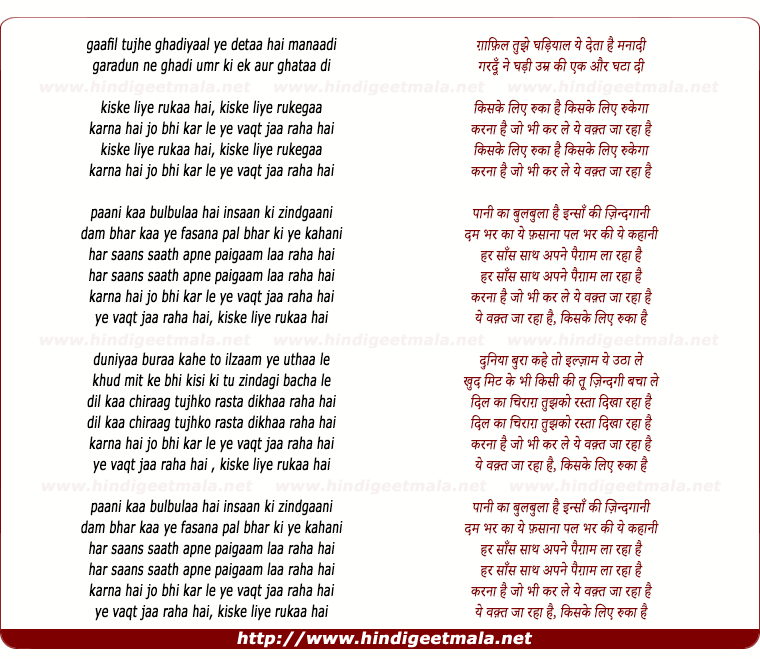 Comments on song "Gaafil Tujhe Ghadiyaal Ye"
rumahale on Monday, April 02, 2012
I did not know of this movie earlier - thanks to YouTube could know of good
songs it has. I also understand that this movie has good story and plot
with Ashok Kumar and Madhubala in the cast. This song was not heard
regularly - I was content with short clip; glad to see the extended
version. Powerful lyrics by Prem Dhawan, brilliant music score by Ravi,
heavenly voice from Rafi Sahab and superb performance by Ashok Kumar are
sufficient to make it all the great. Thanks for excellent presentation.

rumahale on Monday, April 02, 2012
And, something about the lyrics. I read somewhere that﻿ composer Ravi
was caring for lyrics and composed tunes based on lyrics, as opposed to the
convention of tunes first and then fitting lyrics. Late Sahir Ludhianvi
fought for the cause of lyrics but was disappointed of the convention. It
is interesting to see that Ravi and Sahir had good association. Where all
these lyrics have gone nowadays? Regards.

crazyoldsongs on Monday, April 02, 2012
thank you , i have faint memories of this song heard rarely . ''sab kuchh
luta ke hosh mein aaye to kyaa kiyaa '' by talat was more often played on
the radio . this one by rafi is excellent too !