Average Rating : 4.10
Total Vote(s) : 81
Please rate this song between 1 star and 5 stars (5 stars being the best). Just move your mouse on the stars above and click as per your rating. Your rating will really help us to improve our website. 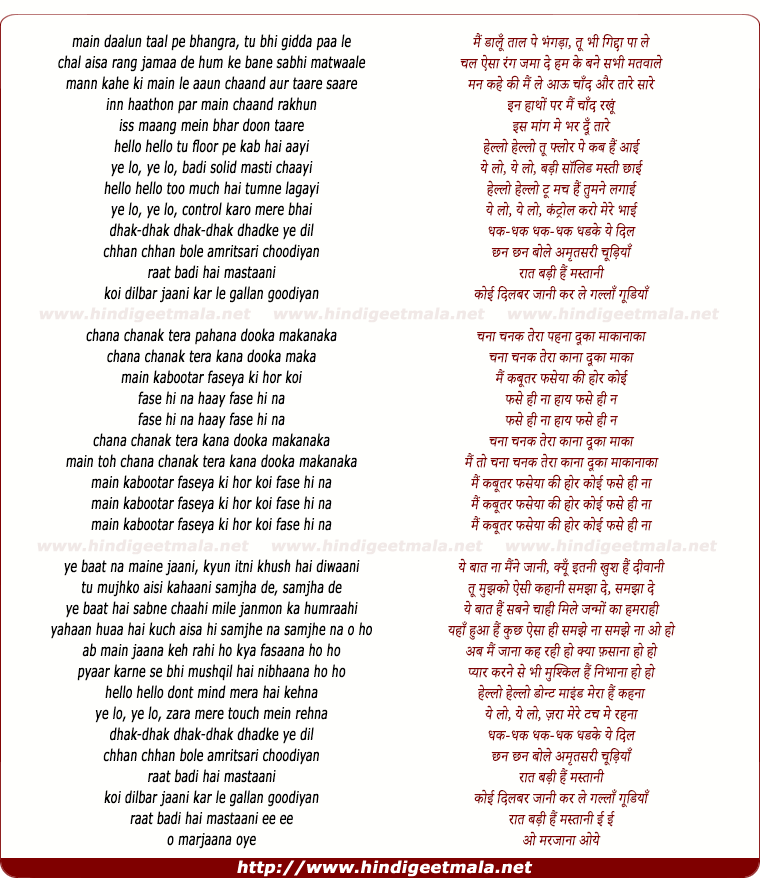 Comments on song "Gallan Goodiyaan"
Tanjil Kamal on Monday, May 04, 2015
By looking at the Mr Bull Ranveer rest sure all public heart become failure
forget about Dil Dhadakne Do. Mr Bull Ranveer is odd looking cheap smell
talented guy from Bollywood industry compare to rest new comers like Varun
and Ranbir Kapoor. Prinyka become too old and looks ugly plus her body &
dance movement become odd for her old age problem. Miss Bee Anushka looks
ugly too compare to Bombay Velvet. Except Anil's acting it looks rest all
have zero ingredients for Dil Dhadakne Do, Becuause all public Dil Margaya
only pay 10 Rupees per ticket, so the producer Ka Dil Dhadakne Do and
Samajne Do how to make a good movie next time than casting that Mr Bull
Laura Biscuit Ranveer..!!!﻿

RAJESH SHARMA on Tuesday, July 07, 2015
WHO SAID THIS IS PUNJABI PARTY, JUST BECAUSE THE WORD - USED AMRITSARIYAN
CHUDIYAN IN THIS SONG, MY DEAR THIS IS PURE BOLLYWOOD PARTY SONG, DON'T
COMPARE WITH PUNJABI PARTY, MAXIMUM SAME DHOLE TUNE IN ALL THE PUNJABI
FAMOUSE SONGS, BUT THIS ONE IS JHAKAS. BEST LINE DON'T MIND MERE
TOUCH MEIN REHNA.﻿

Robin on Sunday, June 07, 2015
Tears came through my eyes while watching Priyanka! Just look at Priyanka's
energy I bet Priyanka alone can dance on this song without a single cut !
Her expressions her energy her dance steps face expressions are awesome and
Karan Johar would love to dance on it and direct it ! ﻿

Rachel Krishika on Monday, June 08, 2015
I have been reading some of the comments and I can see it's NEARLY done in
one whole shot. But, closely look at 1:02 and 3:39, you see there's split.
I really love this song. Show and heard it today 5:56pm on hindi tv and
started dancing to it and its on replay on youtube.﻿