Video of this song from youtube
Average Rating : 4.57
Total Vote(s) : 145
Please rate this song between 1 star and 5 stars (5 stars being the best). Just move your mouse on the stars above and click as per your rating. Your rating will really help us to improve our website. 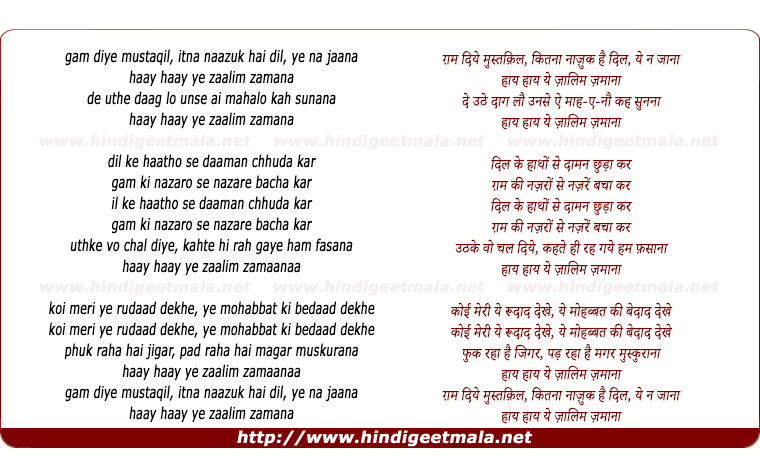 Comments on song "Gam Diye Mustaqil, Itanaa Naazuk Hai Dil, Ye Na Jaanaa"
naseem1986 on Monday, September 22, 2008
very nice old song. please post some more songs of kl saigal ji. thanks for posting, this is aman dayani from toronto canada.
mrshahcph on Monday, January 24, 2011
I have listened to this terrific song after a long time. What a great song. Though the style and the way of singing does not belong to my generation and does not appeal but the composition and the lyrics of this song and an-other gem of this singer "Aye qatibay taqdeer" have made this artist a legend. So much so his death made these songs immortal. When ever we listen to these two particular songs, we often goes in to those memories in which his death being occurred.
24rth January 2011)

vagabondvoyage08 on Sunday, November 23, 2008
acting and keeping the expressions in coherence with the situation, singing and adjusting the tone as the tune demands, and with the pressure of delivering the best in both the audio and the video...all these at the same time is probably a feat which today's actors can't even dream of performing.
ChaudharyZia on Wednesday, July 09, 2008
Gham diyee Mustaqil.
ye to Dunia ka dastoor he.
is dunia main wafa Dhoondna Bohat mushkil hy.
ab Rishte dar dost sub Dhooka karte hain.
I Love this song because this my own World.