Video of this song from youtube
Average Rating : 3.67
Total Vote(s) : 317
Please rate this song between 1 star and 5 stars (5 stars being the best). Just move your mouse on the stars above and click as per your rating. Your rating will really help us to improve our website. 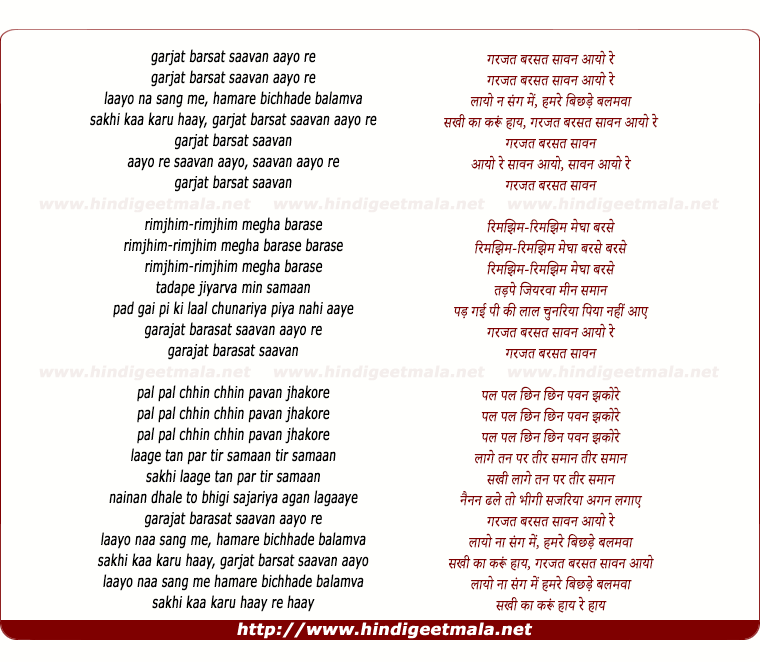 Comments on song "Garajat Barasat Saavan Aayo Re"
renukaprasadtumkurba on Friday, September 28, 2012
Swargiya Roshan saheb's composition on raag malhaar enthralls me since my childhood, saahir ludhyanvi saheb's lyrics is unblemished awadh lilts, Kmal Baarotji and our Suman 'Kalyanpur' ( a small town in uttarakannada district in Karnataka) Jr. Lataji have excelled in reciting this song. on screen it was shyama and other actress, I donot know; have wonderfully acted. Kudos to them.
apparaoarani on Sunday, February 06, 2011
Same song with slight change , ( Latha solo ) was earlier used by Roshan lall Nagarath, for " Malhar " ( about 1950 ) . Both are used for Title back ground only. Suhaneeji already uploaded in U tube . Dont miss . Why I am writing this is , only 5589 Viewed this very very very rare collection-Arani.Apparao-Hyderabad-A.P.
that Malhar somg-

durlabh kolhe on Sunday, June 06, 2010
please correct the information given in narration of the song...barsat ki
raat starring Bharat Bhushan, Shyama and Madhubala..delete the name
of sadhana and replace it by shyama. people get confused due to name of
sadhana. sadhana was never there in film barsat ki raat. shyama was in the
film. please do the needful.

rumahale on Tuesday, August 07, 2012
It is always desirable that basic and vital information of the song be
published i.e. lyricist, music composer and singer(s) in addition to name
of the movie.