Video of this song from youtube
Average Rating : 4.26
Total Vote(s) : 58
Please rate this song between 1 star and 5 stars (5 stars being the best). Just move your mouse on the stars above and click as per your rating. Your rating will really help us to improve our website. 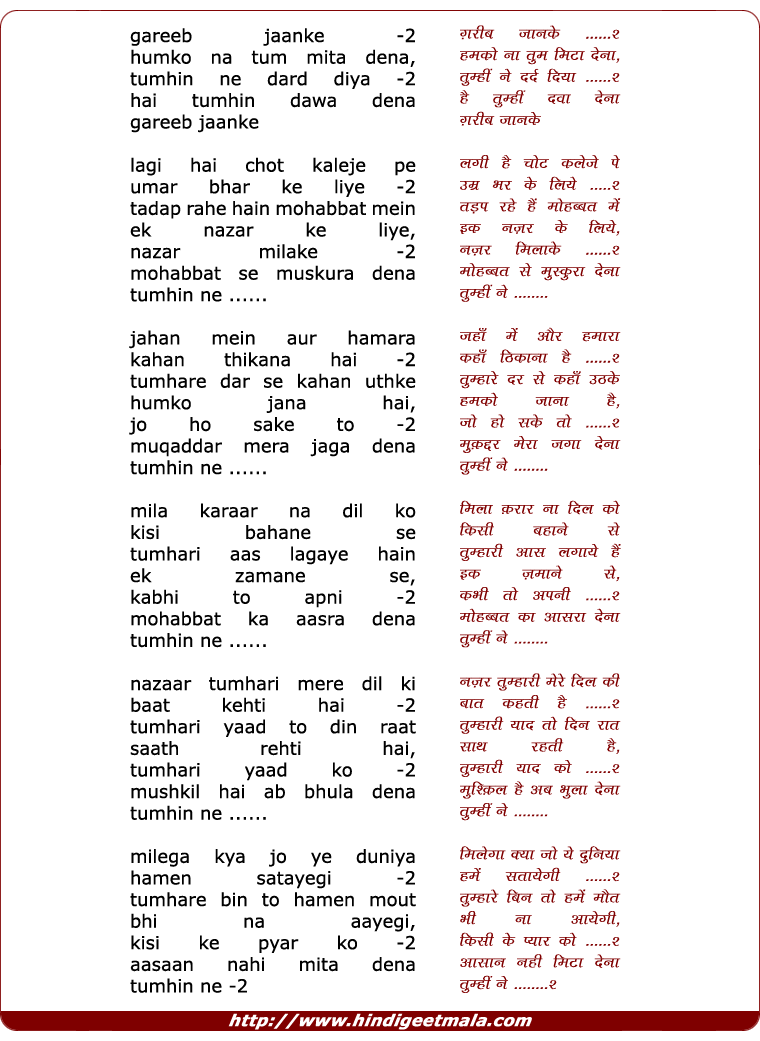 Comments on song "Gareeb Jaan Ke Hum Ko"
Saayo Naara on Sunday, April 29, 2012
Melodious song in all aspects be it with lyrics, playbacks or music, are
all at the HIGHEST level. Kamal hai thinou-ka. And one of the THREE MOST
BEAUTIFUL ACTRESSES of all time in INDIAN cinema acted in the film. She was
ANITA GUHA, the other two were MADHUBALA and SUCHITRA SEN (not in this
film) They were NATURALLY BEAUTIFUL women (one could say as GIFTED). NOT
like today's plasticated bust & bosom flashing actresses. Infect, ANITA
GUHA was crowned (1st) in a beauty contest in those days.

sonny19xx on Saturday, February 28, 2009
A terrific song. An all trime great. Such songs are what that made the 50s
to be called the golden age of Bollywood music. The orchestra and the tune
of this song are out of this world. Iam a great fan of OPN- Rafi magic.
Geeta provides valuable support. OPN just composed and thereby created
public taste for his songs. A good lesson to the current day so called
Bollywood composers. THANKS neerajkamini

Neeraj Gupta on Monday, February 23, 2009
Thanks for the nice comments. I had this song on a video tape & had to
convert it to the electronic format. I have no idea where can you get DVD
or VCD.. I had this on Video for 22 years.