Video of this song from youtube
Average Rating : 4.73
Total Vote(s) : 15
Please rate this song between 1 star and 5 stars (5 stars being the best). Just move your mouse on the stars above and click as per your rating. Your rating will really help us to improve our website. 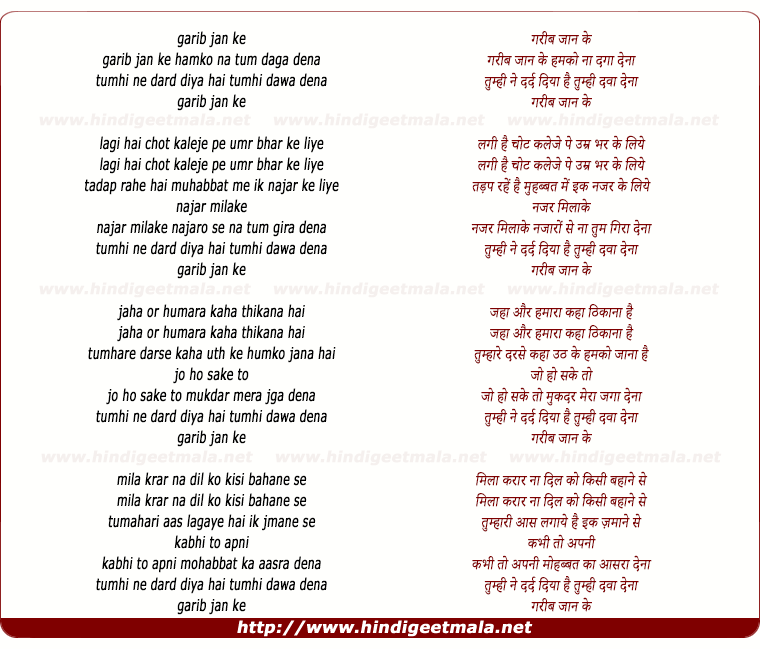 Comments on song "Garib Jan Key Hamko Naa Tum Daga Dena"
pobox101 on Sunday, April 29, 2012
Melodious song in all aspects be it with lyrics, playbacks or music, are all at the HIGHEST level. Kamal hai thinou-ka. And one of the THREE MOST BEAUTIFUL ACTRESSES of all time in INDIAN cinema acted in the film. She was ANITA GUHA, the other two were MADHUBALA and SUCHITRA SEN (not in this film) They were NATURALLY BEAUTIFUL women (one could say as GIFTED). NOT like today's plasticated bust & bosom flashing actresses. Infect, ANITA GUHA was crowned (1st) in a beauty contest in those days.
Jagjit Singh Ishar on Friday, December 06, 2013
The gr8 lyrics composition & the honey sweet voice. Zillion salutes to Jan
Nissar Akhtar, O P Nayyar & Rafi sahib.﻿

Satyajeet Vaidya on Tuesday, October 22, 2013
What a song...what beautiful music between stanzas, what a tune...op sahab
rafi sahab...million salutes