Video of this song from youtube
Average Rating : 4.51
Total Vote(s) : 121
Please rate this song between 1 star and 5 stars (5 stars being the best). Just move your mouse on the stars above and click as per your rating. Your rating will really help us to improve our website. 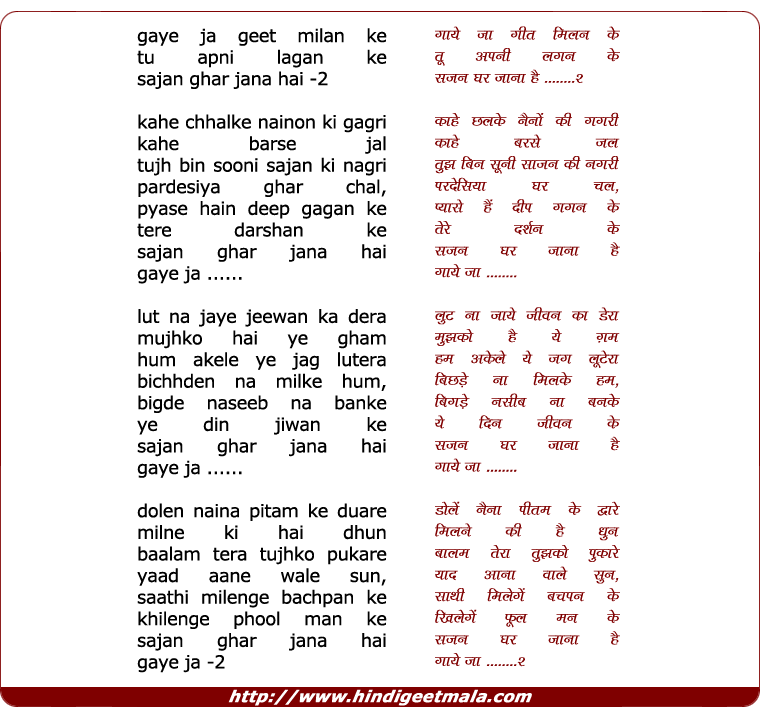 Comments on song "Gaye Ja Geet Milan Ke, Tu Apni Lagan Ke"
vasantrao deshpande on Saturday, February 23, 2013
Beautiful song by Mukeh with Shamshaad Begum and composed by Naushad Sahab.
I saw this picture MELA in the 1951. And my friends used to sing "DHARATI
KO AA" with beautiful voice of SHAMSHAAD BEGUM SAAHIBA. I still enjoy the
song AI ZINDAGIKE MELE on my laptop.

Venkat Warren on Wednesday, December 25, 2013
This is a very painful song for me to listen and watch; DILIP KUMAR acts
so magnificently and MUKESH sings so poignantly; when I first saw this
movie in 1950 I cried all day ! Those were my very impressionable ages;I
was 7 years old ! Venkat.﻿

Ramesh Thakrar on Saturday, December 10, 2011
A very popular song of its time, is still loved by all young and old. Thank
you amitaji. It is a pity that Mukeshi died so young. I love all his songs.

Ramesh Thakrar on Saturday, December 10, 2011
A very popular song. Thank you Amitaji. It is a pity that Mukeshji died so
young. The world was deprived of his melodious voice.

crazyoldsongs on Friday, December 18, 2009
lovely song rendered in the heavenly voice of mukesh seen after many many
years after chilhood when i saw it on dd . thanks