Video of this song from youtube
Average Rating : 4.10
Total Vote(s) : 31
Please rate this song between 1 star and 5 stars (5 stars being the best). Just move your mouse on the stars above and click as per your rating. Your rating will really help us to improve our website. 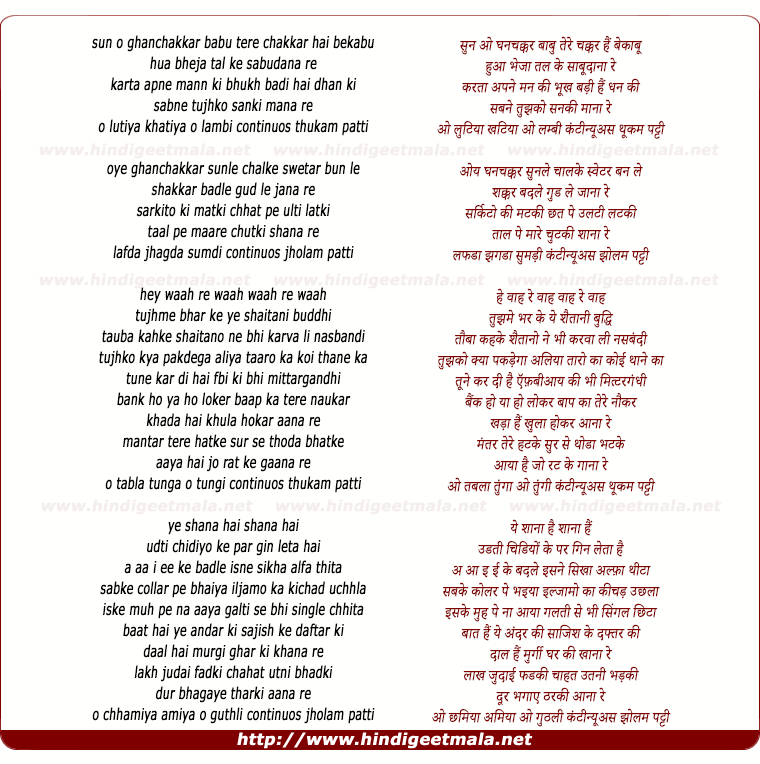 Comments on song "Ghanchakkar Babu Tere Chakkar Hai Bekabu"
nabarun mukherjee on Friday, May 17, 2013
You didn't understand what i meant. I meant that Trivedi is for those who
can't effort A.R.Rahman but want supreme quality music, because Rahman
charges very high. I meant Trivedi is as good as Rahman. By the way
mentioning Trivedi as poor man's Rahman was not my quote, it was originally
quoted by Anurag Kashyap after working with him in Dev D. I am big fan of
Amit Trivedi's genre of music.

Shah Shaheen on Saturday, May 18, 2013
NO. Trivedi is yet far from Rahman's standard. because Rahman can compose songs which is equally critical and popular. Rahman can be Pritam creating trendsetter songs and can also compose offbeat songs . listen songs of Maryan .new tamil songs.. you will understand. I hardly sings Amit's songs. Not much attracting, may be critically acclaimed.
Rahul Sharma on Wednesday, May 22, 2013
There is nobody in bollywood who can come into fame without doing the wrong
thing,he has won national award,filmfare award but still there are many
guys who doesn't know Amit trivedi, but Amit trivedi doesn't need such
cheap act.

dhaliwal83 on Tuesday, June 18, 2013
Chandan sahb I had a go on the game lets ride but this much similarity is
not called copying. When u'lll quit marijuana, u'll find the difference.
Don't mind bro, just being funny. Cheers!

Deepak Kumar on Saturday, June 22, 2013
tere se nahi pucha oye...if i don't know something its not a big deal, im
still a teenager how do i know about very old movies, stop being so silly
dude