Video of this song from youtube
Average Rating : 3.75
Total Vote(s) : 12
Please rate this song between 1 star and 5 stars (5 stars being the best). Just move your mouse on the stars above and click as per your rating. Your rating will really help us to improve our website. 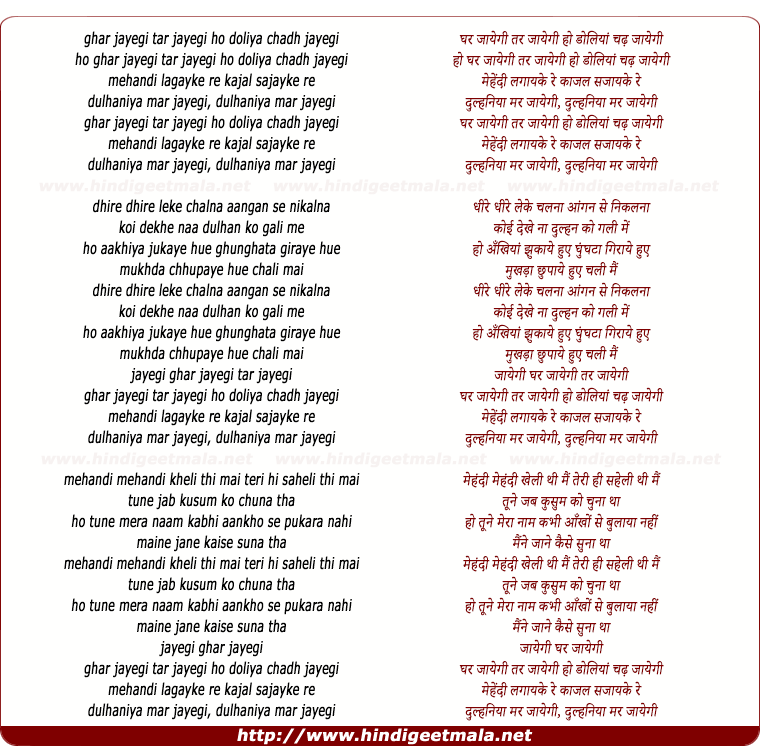 Comments on song "Ghar Jayegee Tar Jayegee"
BeIndianatHeart on Sunday, January 22, 2012
"tarna" means that her JEEVAN will be SAFAL after she goes to her spouse's home but she will die of shyness, her death relates a deeper connotation of achieving MUKTI through her marriage. Such magic could have been only created by Gulzarji who knew how to incorporate high values and philosophy through the simplest words. I hope this helps you my friend, it feels nice when our generation at least tries to understand such deep meaning lyrics amid the superficial chikini chameli etc.
VispisAngel on Wednesday, July 13, 2011
Asha Bhosle at her musical peak!! This was the era of beautiful songs, and Ashaji's immense contribution will be written in gold for sure. A memorable song, Hema Malini has done full justice to it. A gem!
Rajeev Kashikar on Friday, October 30, 2015
Superlative combo of solo instrumentation hariprasadji on bansuri,
shivkumar Sharma on santur ( awwsum pieces), manohari Singh on mandolin,
uttam singh's touching solo violin, trilok gurtu on bongo n maruti rao on
tabla.. recorded in mehboob studios, bandra bombay in 1974!﻿

Rajeev Kashikar on Friday, October 30, 2015
One of the greatest work of music by RD Burman and team... Complex notes
made to sound simple, awsum racy rhythm, seductive vocals by asha, gr8
example of traditional fusing with typically modern RD sound.. what a guy
RD!﻿

arpit020990 on Tuesday, January 24, 2012
Thanks for clearing that up.
Gulzarji is really awesome. I made it a point to understand meaning of every line in "chaiya chaiya" but i could understand only 80% of it. May be u can help me understand the rest.