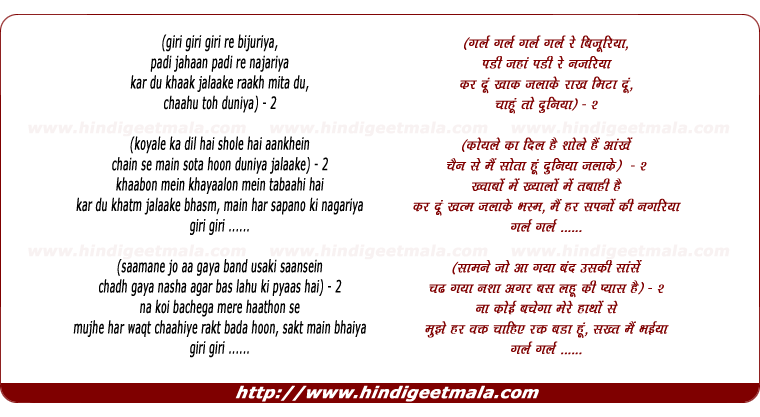 Comments on song "Giri Giri Re Bijuriya Padi Jaha Padi Re Najariya"
cibissum on Friday, January 21, 2011
@SamhainTheDark Yeah but my point was that particular version of the movie
DVD does have English subtitles. Perhaps a rental store has it and someone
can watch it that way. I wasn't trying to grade the movie itself, just that
it's accessible to those of us who only know two languages...English and
bad English.

cibissum on Thursday, January 20, 2011
@SamhainTheDark For the record, the release by Eros that is sold on
Amazon.com does have english subtitles. Just to ensure, the same version, I
got the ASIN: B002ZCDT0O one and the DVD's menu's are in english as well as
having english subtitles. Easily enjoyed by anyone.

5mileyss on Saturday, January 08, 2011
i love the video and the song is very catchy, sanjays voice is perfect for
the character. great movie! i cant believe it didnt do well, although
nowadays bollywood is ruled by 'top actors' versus talent, such a shame.

Zachary Matthew James on Friday, January 21, 2011
@cibissum Yes, but I need to see it before I buy it. Don't really want to
spend money and then discover I may not like what I'm buying.

Zachary Matthew James on Wednesday, December 08, 2010
@2wingo Not likely. It's in Hindi and there aren't even any subtitles. Few
people will understand it.