Video of this song from youtube
Average Rating : 4.12
Total Vote(s) : 136
Please rate this song between 1 star and 5 stars (5 stars being the best). Just move your mouse on the stars above and click as per your rating. Your rating will really help us to improve our website. 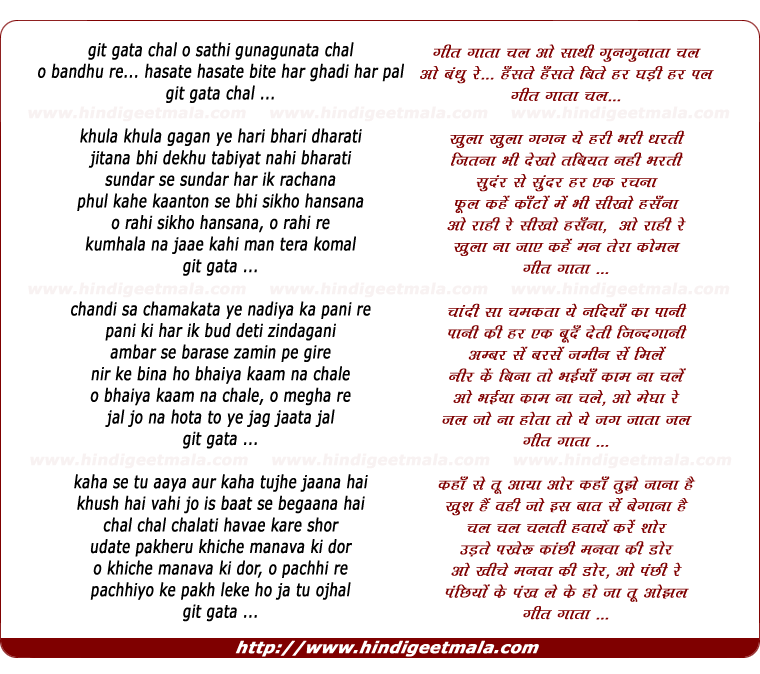 Comments on song "Git Gaataa Chal O Saathi Gunagunaataa Chal"
gautamgohil on Sunday, November 07, 2010
So beautiful is every creation,
the flowers as they beckon
to be cheerful when in thorns.
(in other way - Every beautiful
creation of nature like the flowers
with thorns inspire us to live life
cheerfully

Meiraj100 on Friday, April 20, 2012
So many memories with this song !! wonderful lyrics and beautiful picturesqueness :)
pooranlal on Monday, January 06, 2014
lovely lovely song , i was in school when this movie came out , i was
about 13 yrs , . very rarely we went to the movies , well my mother
invested her little money she had into out education rather sending us to
the movies , but once in a Blue moon we would be rewarded and go to the
Cinema , but the nice thing about it when the movie came out everyday at
6 .00 pm there will be indian program on the radios and all the songs will
be played and i will wait at dust to listen to my favorite movie songs ,
those were the best and era of innocence which cannot be replaced . those
days we had no Tv set so i depended on the radio for my indian songs , BTW
i am from Trinidad West Indies , Today the Cinema in my town of Penal no
longer exists it was called Sunbeam Cinema .now i look back it seems like a
dream an era gone by , life goes on and memories that cannot be forgotten ,
i wish i can go back and spend one day back in those days and remember the
people in my Village that are no longer there ,﻿


ardhendu tripathi on Friday, October 17, 2008
sachin is making serials & now he's a part programmes like talent hunts of
singers... he's working as a senior judge in the reality shows on the
channels like me-marathi.sometimes he does anchoring in some talent hunts.

nilkashikar on Wednesday, February 10, 2010
Thanks to Rajshri...such classics! Their works are trure
gems. Rather than anything, their movies and songs have essentially
captured the 'bharat ki mitti ki khushbu'. True emotions of india.