Video of this song from youtube
Average Rating : 3.54
Total Vote(s) : 968
Please rate this song between 1 star and 5 stars (5 stars being the best). Just move your mouse on the stars above and click as per your rating. Your rating will really help us to improve our website. 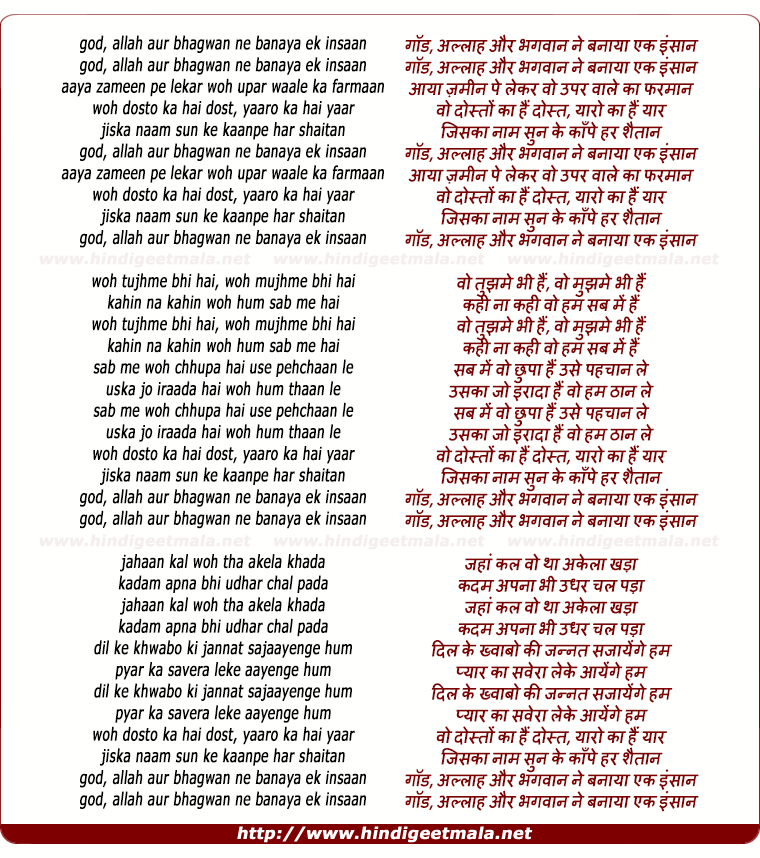 Comments on song "God Allah Aur Bhagwan Ne Banaya Ek Insaan"
Zian Shahid on Thursday, October 10, 2013
Maybe it's a good thing that they're copying minor scenes or action scenes
from hwood. Let me be honest I am a half spanish, half bengali Canadian. I
watch hindi movies because I know all of them have great potential. I would
rather see a director doing this than making the same cliche action flick.
There's a saying, when one attempts to cross the bridge, others will
follow. This movie will determine the future of bwood movies. If it fails,
then we'll be seeing those cliche movies. If not?

st jude on Sunday, October 13, 2013
Please Kindly see thewarningsecondcoming dotcom "My sorrow at this time is
great as all that was foretold by me during the apparitions at La Salette
and Fatima are now unfolding before you all, but many of you are blind.
Those of you who dedicated hours before me at my most holy shrines must
come and ask me, your Mother, to open your eyes to the Truth. You must ask
me to consecrate your hearts and souls to my Son, otherwise you too will
deny Him. Your beloved Mother Mother of Salvation "

Arshaq Assoo on Thursday, October 10, 2013
Nevertheless, it is copied. If you see something which you saw briefly in
another movie, it doesn't mean that it isn't/ couldn't be copied. Besides,
since it was shown for a few seconds, all the more reason for Rakesh Roshan
to jump on the Creepy Jet Black Superhero Statue bandwagon. Besides, I'm
just noting out that they copied even the minute details from other
superhero movies. If you want, I can give you all the things wrong with
this film (I'm not considering as a Bollywood movie)

1kiranparmar on Saturday, October 19, 2013
The superhero is a good character and I wont knock it --so i disagree with
your comments on that one. However, you are right that we could do better
and create more powerful characters like those we read up in Mahabhrata and
Ramayana. Yogis with super powers-- who helps humanity could easily pack
punches with any American created superheores. I dont understand why
Indians are so hesitant to use these amazing superheroes we first created
some 7,000 years ago.

The RKR on Thursday, October 10, 2013
This movie didn't even come out and you guys are like I hate this...that
this that. Just Chill Out. Relax and see the movie. You can't expect 2007
like songs in 2013 movie okay. Plus I like the different varieties of song
this movie have. Dil Tu Hi Bataa is a hit already and its so beautiful.
This is gona have the best story ever.