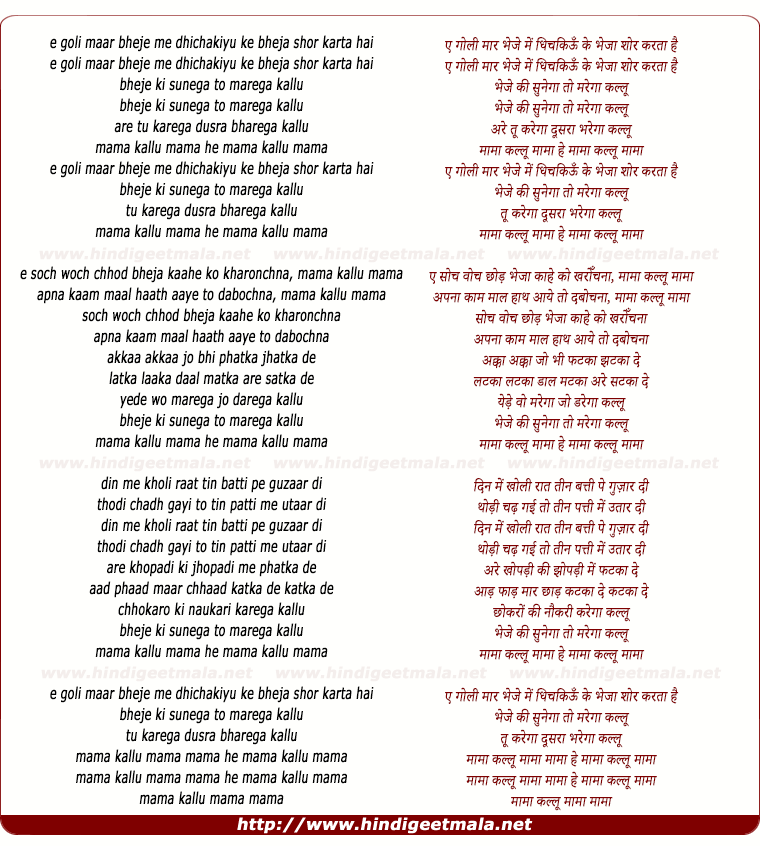 Comments on song "Goli Maar Bheje Me, Mama Kallu Mama"
chamarBhangiBhaSodhi on Friday, September 24, 2010
Additionally, an unarmed lady was attacked by these two persons with a
series of bullets and it has been found that a number of bullets entered
her body.31 IN TOTAL The manner in which mercilessly she was attacked by
these two persons on whom confidence was reposed to give her protection
repels any consideration of reduction of sentence. In this view of the
matter, even the conspirator who inspired the persons who actually acted
does not deserve any leniency in the matter of sentence.

chamarBhangiBhaSodhi on Friday, September 24, 2010
Mrs. Gandhi was at the head of the entourage. She was approaching the TMC
gate where Beant Singh, SI was on the left side while Satwant Singh,
Constable was on the right side. They had managed to exchanged his duty
with S.I. Jai Narain (PW-7). Satwant Singh ought to be at Beat No. 4. He,
however, managed to get TMC sentry booth by misrepresenting that he was
suffering from dysentry. He was given that place since it was near the
latrine.

Captain SomeoneSomwhere on Sunday, August 12, 2012
Africa, why not ? Indians have a naval base in Madagascar too, come there
to beg us. In the end you will have to beg us like you always do, you
depend on us for water, we export food to you and most importantly the land
that you live on was donated by Indians to you XD Beggars will be beggars.
BTW asia's largest slum is in Porkistan not India :)

Viraj Gharat on Monday, May 30, 2011
This song is about suicide/murdering somebody (I am not quite sure exactly
myself ) but checkout the fact that this song became insanely popular even
among kids when picture got released !! HAPPENS ONLY IN INDIA !! ;D