Video of this song from youtube
Average Rating : 4.50
Total Vote(s) : 80
Please rate this song between 1 star and 5 stars (5 stars being the best). Just move your mouse on the stars above and click as per your rating. Your rating will really help us to improve our website. 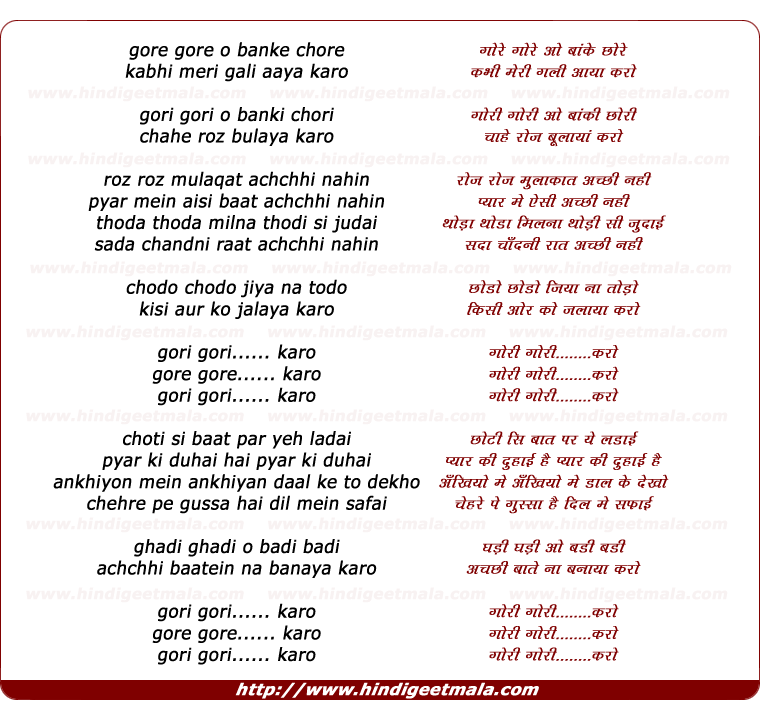 Comments on song "Gore Gore O Banke Chore"
Bajaury on Wednesday, April 17, 2013
You and Rehma have a wonderful presentation of your videos. You always put
the prettiest and flattering pictures of the singers. Be that Lata,
Suriayya, Shamshad etc. Lata and Shamshad were not that good looking in
their middle ages. Lata's young pictures could be attractive and you and
Rehma always show her pretty pictures. That adds to you taste in music and
beauty. Thanks for posting nostalgic Videos.

Mani Menon on Thursday, April 18, 2013
This song was some sort of a landmark in Hindi movies. C Ramchandra ushered
in the 'western' beat! Many people mistakenly believe that it was O P
Nayyar who pioneered western tunes. They're shocked to discover this feet
tapping breezy number sung so beautifully by a very young Lata and the
seasoned Ameerbai Karnatki!

gopal sinha on Friday, March 22, 2013
Evergreen song..excellent team-work...ashok and nalini made a popular
pair..kuldeep kaur was a good vamp..