Average Rating : 4.77
Total Vote(s) : 26
Please rate this song between 1 star and 5 stars (5 stars being the best). Just move your mouse on the stars above and click as per your rating. Your rating will really help us to improve our website. 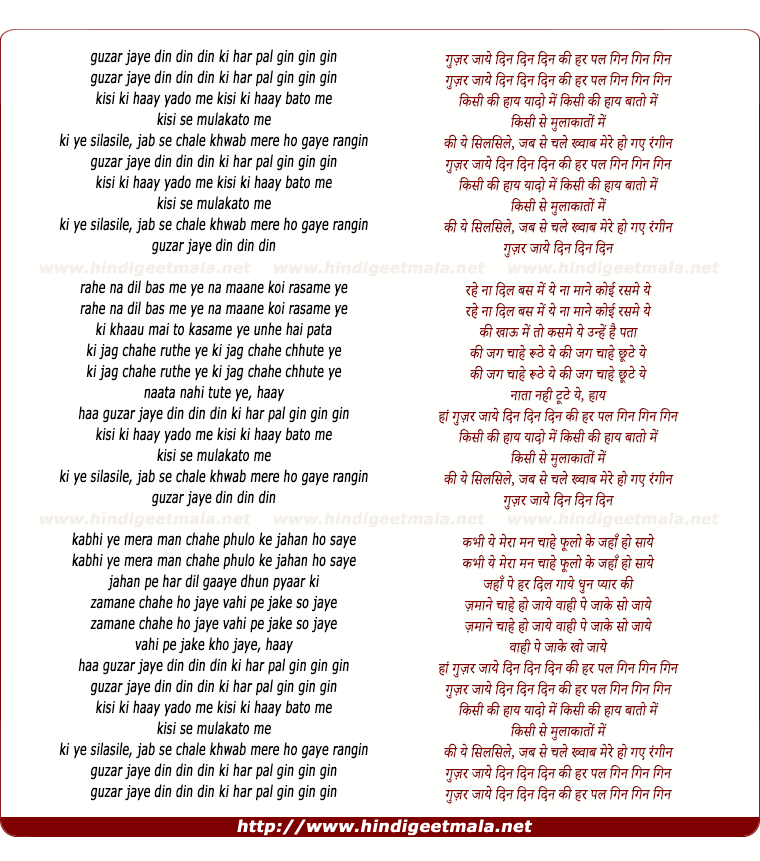 Comments on song "Guzar Jaye Din Din Din"
mialvi9 on Saturday, September 12, 2015
Every composition of Salil Chowdhury has his signature on it. This one is
among his best. The lyrics, too, have the distinct style of songwriter
Yogesh who always penned classy poetry. But the surprise of the song is
Kishore Kumar. This is not his typical tune (in fact, none of SC tunes was
typical for any singer) but he did full justice to it, making it a
memorable song. Extra marks to Asit Sen for filming it in a simple but
beautiful setting.﻿

2244khan on Saturday, December 04, 2010
@rajarshiuiuc thnx for the info; are the Bengali versionsm 1970's and 90's available in youtube? what a magical mixture western beat in this song, tremendously performed by KK; excellent orchestrastion of instrumental back-up; an absolute wonder created by Salil Chowdhuruy especially in this song, all the numbers are classic Salil tunes.
Sri N on Sunday, April 20, 2014
Yes, I remember when they played this song on doordarshan just after it was
announced that Kishore Kumar had passed away.the shock...I hadn't heard
this song before and I was left marveling at the brilliance of KK. This
happens every other day even today.there will never be anyone like
Kishore-da.﻿