Video of this song from youtube
Average Rating : 4.22
Total Vote(s) : 231
Please rate this song between 1 star and 5 stars (5 stars being the best). Just move your mouse on the stars above and click as per your rating. Your rating will really help us to improve our website. 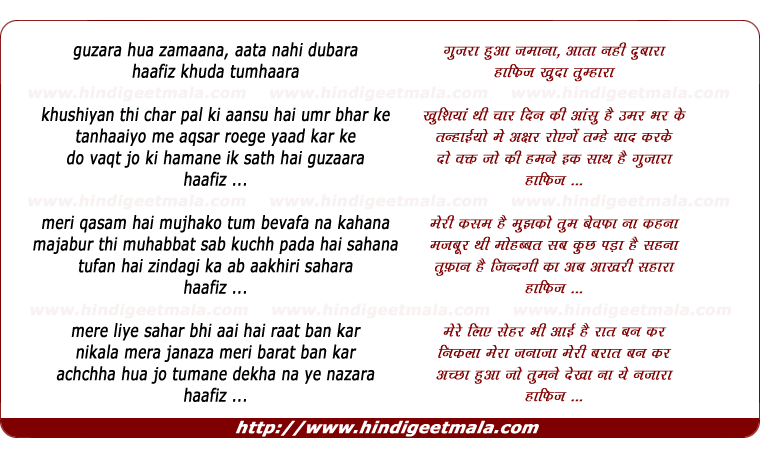 TheHitDetector on Sunday, October 07, 2012
This is one of the most beautiful songs that we are likely to ever
encounter. It is immensely beautiful both in terms of music and the
hauntingly beautiful vocals from this iconic, highly prolific artist.
Generally the music encountered in this genre is usually of a highly
sophisticated nature and of a very high standard indeed and certainly the
case here.Whilst we see rather dated images (to be expected) it in no
way detracts from the fine quality and excellence of this historic
masterpiece.

TheHitDetector on Wednesday, February 29, 2012
As the gentle breeze of time blows away the beautiful souls across the
heavenly universe their work in the form of beautiful music and songs live
on. Such artists as Mumtaz Jahan Begum Dehlavi - Madhubala live on as they
continue to stir emotions within our hearts, minds and souls as in this
case with this hauntingly beautiful song. Also we remember the musicians on
this track with their superb music it's shear perfection. This track has a
certain elegance, beauty and excellence - it's lovely