Video of this song from youtube
Average Rating : 4.16
Total Vote(s) : 244
Please rate this song between 1 star and 5 stars (5 stars being the best). Just move your mouse on the stars above and click as per your rating. Your rating will really help us to improve our website. 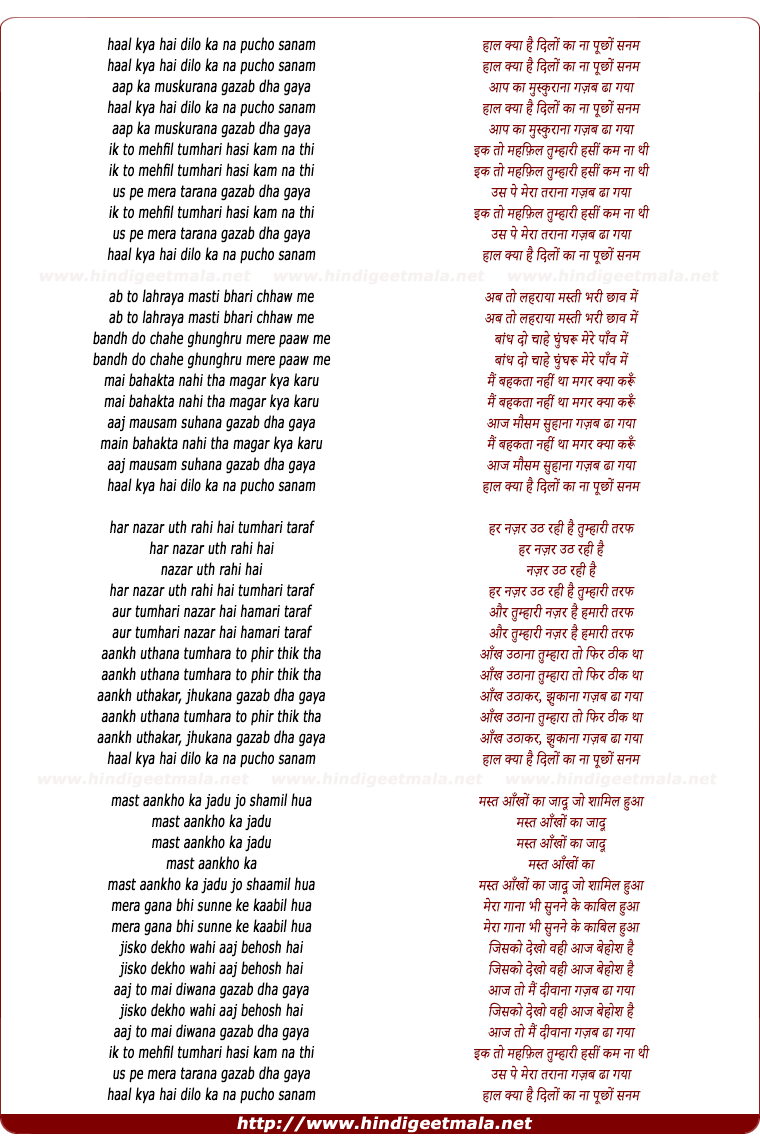 Comments on song "Haal Kya Hai Dilon Ka Na Puchho Sanam"
jasbongy on Tuesday, October 05, 2010
Nice song with sweet lyrics. Jeetendra tries to dance and sing like his
idol Shammi Kapoor . Rekha looks o.k. not like when she started looking
very beautiful after friendship with Amitabh. But from song point of view
it is entertainment always at channel ''Shaam44'' Thanks Jemal ji for
making me cheerful in early morning with this cheerful upload.Love.Sis.
Sarla.

tansen58 on Saturday, January 12, 2013
Kawalli song by Kishore Da is surprising , since he had not sung Kawalli
song earlier , as only Rafi can do so , but Laxmi Pyre experimented first
time , and result is before you. seems clearly that he ( Kishore ) was a
Magician in real manner . Now no one can be like Kishore .

1arshiakhan on Tuesday, October 05, 2010
Our jumping jack Jeetendra is great here! Always love your uploads very
much! Even the film was also very nice and had my favorite Padma Khanna
with two beautiful dance numbers...isn't it? I guess all of the songs in
this film is mind blowing!

1109saqib on Wednesday, August 17, 2011
Wonderfull song by kishore kumar no one can reach near our kishoreda ,he
was from strange world . Legend of this century In singing and acting .
Salute you dada.

Zahed Hossain on Sunday, April 24, 2011
Had Shankar-Jaikshen duo lived couple of years they would have outnumberd
the hit songs of Kishore Kumar composed by R.D.Burman ...no doubt about that