Average Rating : 4.09
Total Vote(s) : 23
Please rate this song between 1 star and 5 stars (5 stars being the best). Just move your mouse on the stars above and click as per your rating. Your rating will really help us to improve our website. 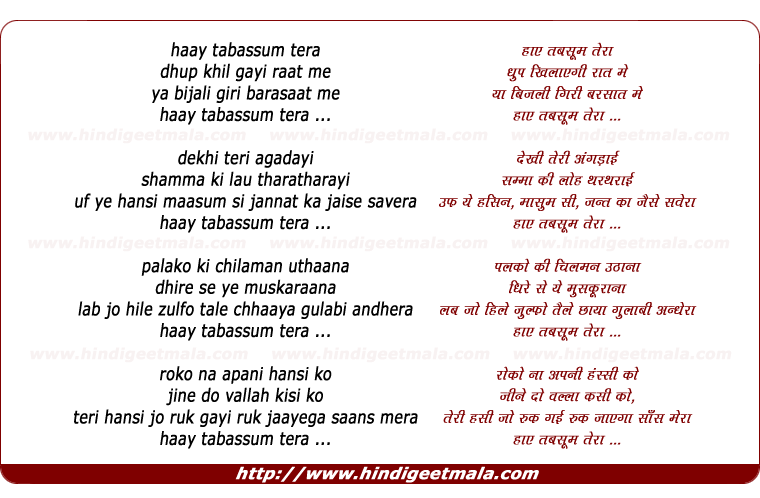 Comments on song "Haaye Tabassum Tera"
bemused321 on Wednesday, May 22, 2013
Lovely song. This happens to be Sanjeev Kumar's first leading role in 1965. He looks trim here compared to his appearance in the 1974 film Mausam. A highly accomplished actor, he died at the early age of 47 in 1985. I recently attended a tribute concert for Gulzar and learned that Gulzar considered Sanjeev Kumar along with R D Burman as one of the anchors in his life. Thank you, Suhanee.
yuanyuanyuanyin on Thursday, May 06, 2010
- Usually, in addition to acknowledging the comment, I too add something but in some cases, I just keep quite for obvious reasons, for I being a "foreigner" myself!
This is one of them, I am afraid.
Thank you my friend for the comment.

Joydeep Acharya on Monday, December 06, 2010
Listening to Rafi sahab transports you to a state of heavenly intoxication
- problems of life momentarily cease to trouble you - you realize there is
so much more beauty and meaning in life

Bharat Gul on Tuesday, May 21, 2013
Dhoop khil gayi raat mein: What better way to compliment the winning smile
of a beloved ! And Moh'd Rafi's voice makes the compliment utterly sincere,
too. Thanks, Suhanee.

Murtuza H on Thursday, August 05, 2010
Beautiful song, and equally beautiful pair of Sanjeev Kumar and Nazima.
This pair was seen in the lead in the film "Raja aur Rank" also. Thanks so
much for the upload.