Video of this song from youtube
Average Rating : 4.30
Total Vote(s) : 33
Please rate this song between 1 star and 5 stars (5 stars being the best). Just move your mouse on the stars above and click as per your rating. Your rating will really help us to improve our website. 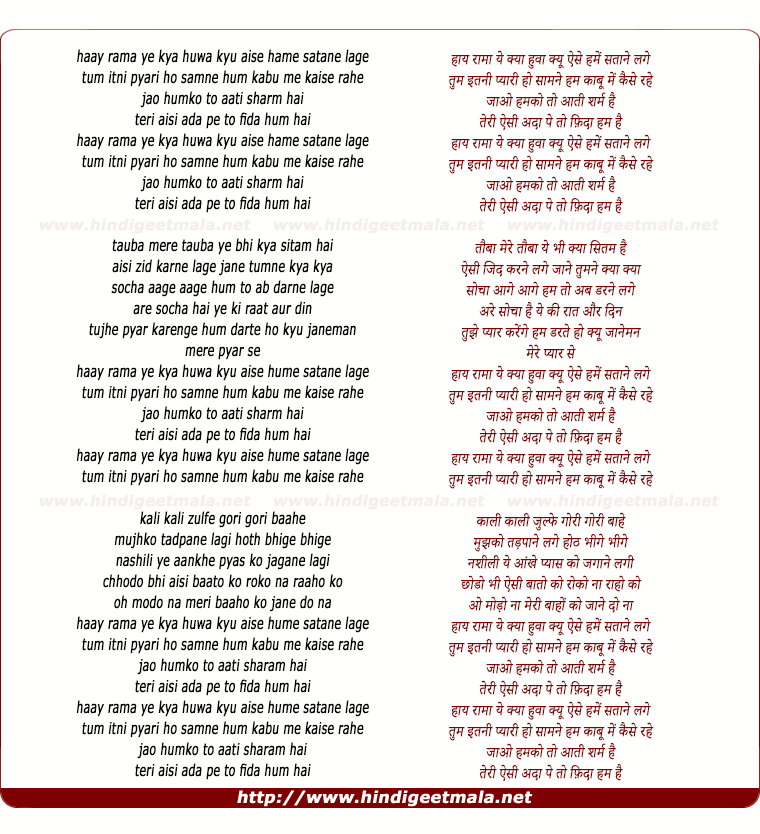 Comments on song "Hai Rama Ye Kya Hua"
Rohan Tom on Saturday, July 13, 2013
R.I.P Swarnalatha! She had one of the most unique voices in the industry! Despite singing many super hit Rahman songs during the initial years of Rahman's career, she didnt get much recognition! and she didnt wait for long either! she passed away in 2010
Gopalrahmaniac on Wednesday, September 14, 2011
This song tries to pulls ur soul from ur body. And the frustrating thing is that, when it comes to international artist's song, they are getting crores of views and thousands of likes. But, our own rahman is not getting such numbers not even for a single song. Ppl are intrested in such craps only. Our genius's masterpieces r stil being unnoticed by many ppl
TheLoopy52 on Saturday, August 18, 2012
This song had everything..saroj khan choreography was mindboggling.n
hariharan sir u r great.n urmila n jackyyy .one word HOOOOTTTTTT...

azamgr8 on Monday, July 05, 2010
go A.R Rehman go ... you are a living legend of music, just how many
times i listen to this i never get bored, awesome lyrics, superb music

ravikanth1223 on Wednesday, October 06, 2010
Swarnalatha is a great singer. We miss you so much. RIP
View all 65 comments related to song Hai Rama Ye Kya Hua