Average Rating : 4.65
Total Vote(s) : 31
Please rate this song between 1 star and 5 stars (5 stars being the best). Just move your mouse on the stars above and click as per your rating. Your rating will really help us to improve our website. 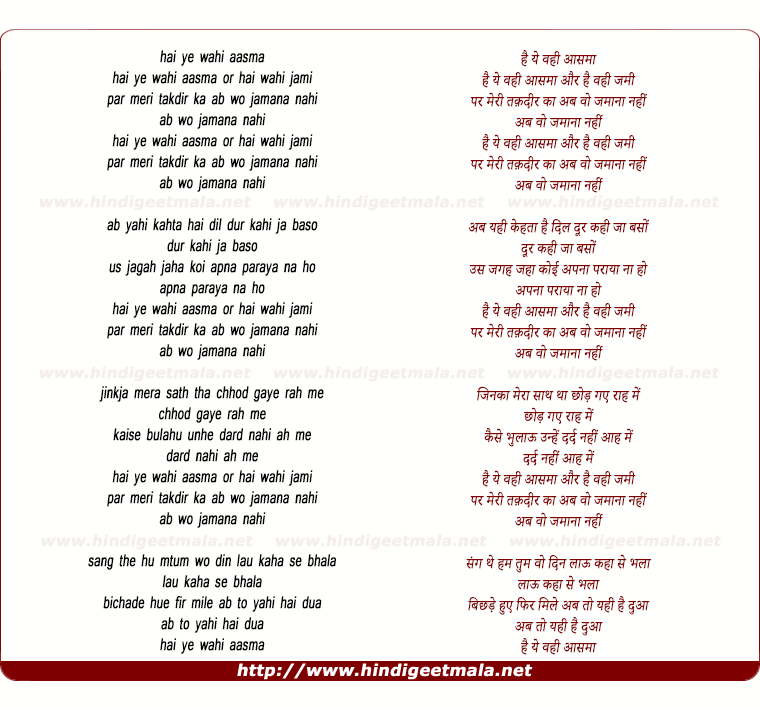 Comments on song "Hai Yeh Wohi Aasman"
girish613 on Tuesday, January 12, 2010
There are two versions of this song sung by Talat Mahmood. The original version was released only on 78 RPM record. The song on LP is re-sung by Talat Mahmood. The music is different and his voice is different. IF YOU WANT TO HEAR THE ORIGINAL SONG GO TO "ajayuv" posting.
After listening to original version, you won't like this version

awd786 on Sunday, April 01, 2012
Thanks for posting. Very few people now a days knows what this. This was the era of real music. Talat, Rafi, Mukaish were those who made the history. These songs reminds me my childhood.
AW. Canada

Kartar Singh baggha on Tuesday, October 26, 2010
One of the Legendary Song, word are like it is made by keeping my life in
thoughts..amazing ...gr8ly sung by talat sahab.such songs are real gem
of india...

KhurramDBG on Tuesday, January 12, 2010
@grish: I totally agree with you. Ajayuv's version of this song is the original one.. and that version is definitely better than mine.
View all 12 comments related to song Hai Yeh Wohi Aasman
Popular Links on HindiGeetMala