Video of this song from youtube
Average Rating : 4.36
Total Vote(s) : 39
Please rate this song between 1 star and 5 stars (5 stars being the best). Just move your mouse on the stars above and click as per your rating. Your rating will really help us to improve our website.

you re the one to me
i love whats meant to be
i know you feel it too, if i look at you 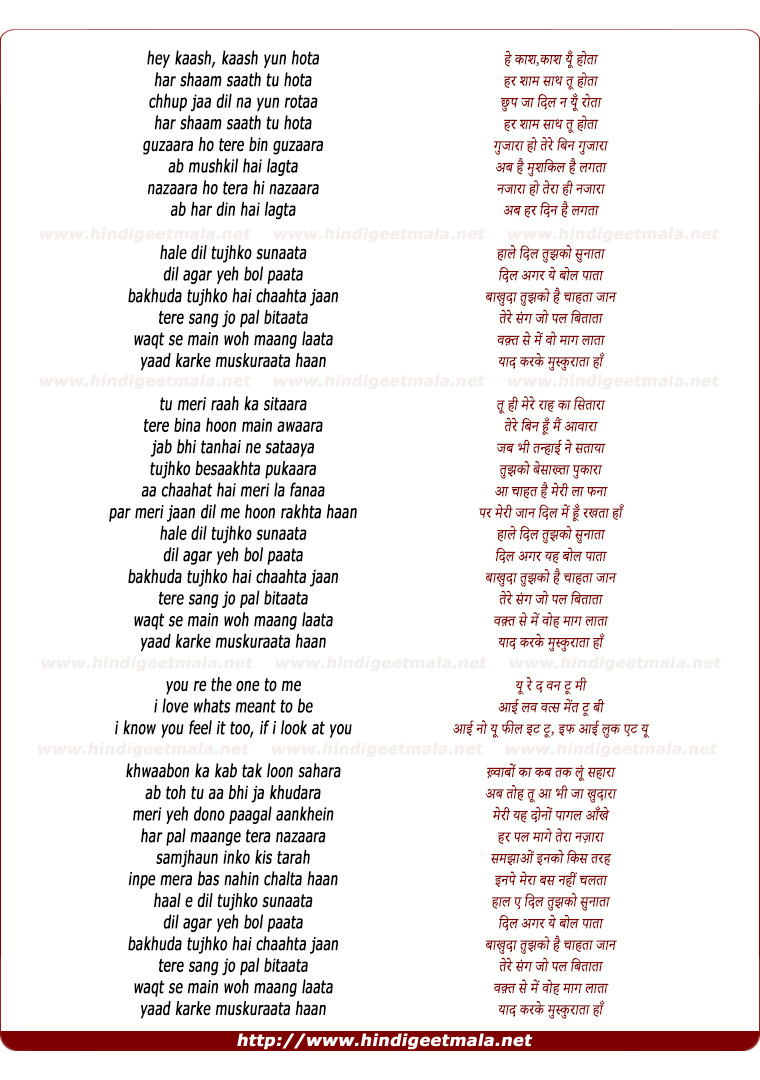 Comments on song "Hale Dil Tujhko Sunata"
zahidbutt88 on Monday, March 26, 2012
i love these movie song amazing song is very different and romantic i love this specially really
Heorteji on Wednesday, March 13, 2013
dude... can you go to uni and learn about language history and help
yourself? I am studying classical languages and I don't need google to know
about the stuff I am majoring in. Sanskrit is not a branch of the persian
language, but persian is derived from a language related to Sanskrit, named
Avestan. Sanskrit is a branch of India-European languages, and is closely
related to Latin and Ancient Greek. All these languages have their origin
in the proto indo european languages. BUt no Arabic!

Heorteji on Tuesday, April 16, 2013
That is half right half wrong. Urdu has its origins in Khariboli and has
the grammatical structure of indo-european languages. Its vocabulary is
influenced by farsi, arabic and turkic languages, yet it does not follow
their grammatical structure. The words are similar, but the structure of
the sentences, the pronouns would be much more like indian languages. It is
not hard to see that Hindi and Urdu have the same origins as people who
speak one can understand the other one.

chandjaisaylarkay on Saturday, September 08, 2012
in the beginning she says her i am women after all and cant stay without
asking why are u coming after me is this love or need of s.e.x he replies i
am habitual to s.e.x after a while she says why u turned your face to other
side when a photographer touched me he said that i am a man after all and
can feel jealous if some else touches my girl then after a while she says
come in for prayers but he denies that i am a sinner and cant go in the end
she says i love u

Heorteji on Saturday, December 22, 2012
urdu is not a Semitic language like Arabic or Hebrew. It is an
Indo-Europoean language. It belongs to the indo-iranian branch of the
indo-european languages. Urdu only has loanwords from Arabic but it is not
derived from arabic, it is derived from sanskrit. NO one speaks sanskrit,
true, but no one speaks Latin nor ancient greek, yet they are the origin of
all european languages. Similarly urdu has its origins in sanskrit