Video of this song from youtube
Average Rating : 3.33
Total Vote(s) : 9
Please rate this song between 1 star and 5 stars (5 stars being the best). Just move your mouse on the stars above and click as per your rating. Your rating will really help us to improve our website. 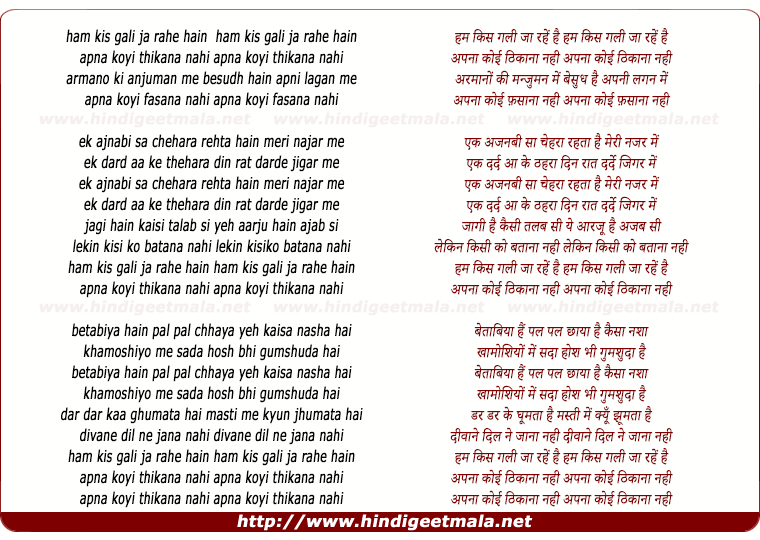 Comments on song "Ham Kis Gali Ja Rahe Hai"
Venomous Erection on Sunday, January 12, 2014
There is a growing theory about mind control & skin bleaching may be part
of a subtle plot to enslave the minds of people & to make them subserviant
in a way to better suit the ruling classes.
We need only to examine the plight of the 'Dalit' peoples of India
The anger in the Northern English & Scottish working class.
Racism & Gangs in America - a nation of immigrants.

There are proven techniques using colours & sounds which even though the
conscious mind misses, the subconcious still registers.

The Media, Education, Health & Travel sectors of UN Countries could in
theory all be owned by the same people.

After just 4 generations in the UK many people from the Indian subcontinent
perceive Blonde, Blue-Eyed Hollywood featured as the beautiful & purest.

Desperate to be accepted in White Saxon/Viking society, they resort to
skin-lighten while still following the faiths of their ancestors.

nicerusgirl on Thursday, January 13, 2011
really we don't know where we are going but still we have a long journey with a great taste and determination.anyhow life is life some times joys some times sorrows.
some 1 should lead it with pleasure to depart peacefuly.MaroAhmadzai

shirish777 on Sunday, April 25, 2010
@kiransweety1
LOL... surely u seem to be living in a world of illusion and desperately seeking psycho therapy... i dont think ur even worth of any debate.. so don't expect any further response from me on your nonsense arguments...

Rajiv jaigopal wadhwa on Thursday, April 03, 2008
i thought this was suppose to be the comments section? You could ost your
thoughts about the song. I dint like it so I posted. Yea I am jealous thats
y said that aadat was soo good. rite.. your either blind or illiterate?

nicerusgirl on Thursday, January 13, 2011
Yes no body know where we are going but still we have hope and determination for the life journey.joys & sorrows get together and make it easy to depart to complete this journey successful and colorful.Maro Ahmadzai
View all 270 comments related to song Ham Kis Gali Ja Rahe Hai
Popular Links on HindiGeetMala