Video of this song from youtube
Average Rating : 4.55
Total Vote(s) : 64
Please rate this song between 1 star and 5 stars (5 stars being the best). Just move your mouse on the stars above and click as per your rating. Your rating will really help us to improve our website. 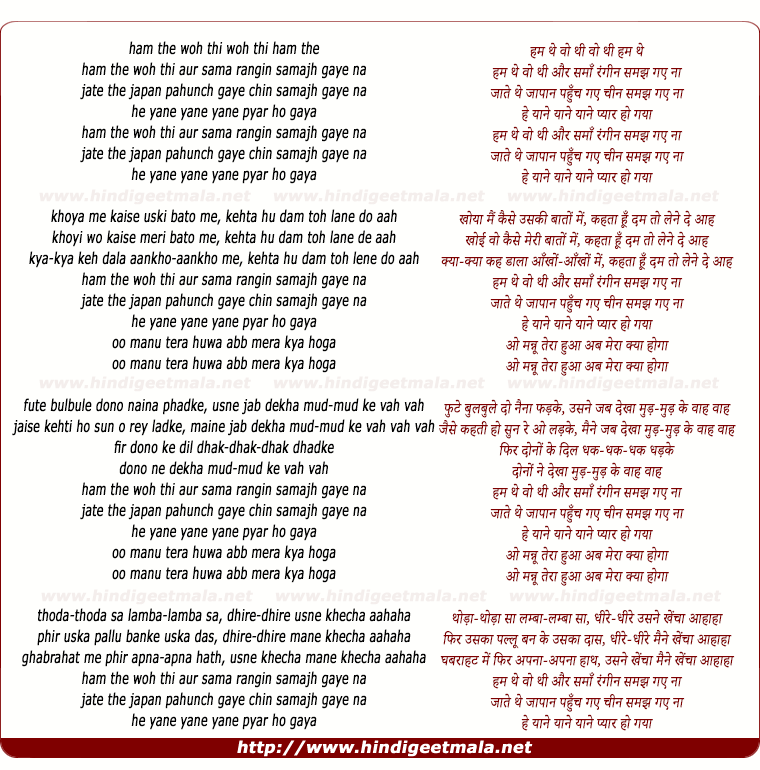 Comments on song "Hum The Woh Thi Aur Sama Rangin"
zulftarash on Tuesday, August 03, 2010
Though I like this song and many other popular songs but after having a look at this website given below, that this song is a copy of some western song/international song...
w w w.itwofs. c o m
You wont believe after going through this website...songs we gre up with are all copied and some very blatantly...

gopal sinha on Tuesday, January 14, 2014
कमाल की कौमेडी है दो भाइयों की और कमाल का गाना !﻿
Narendra Shah on Thursday, July 14, 2011
As read somewhere,on the first day of shooting, the original director
developed a cold feet after seeing the three Ganguly Brothers and he backed
off and that is how Tarun Bose stepped in.Ganguly brothers had made this
movie to make losses so as to claim losses in Income Tax.They had booked
the theatres for only one week, knowing fully well that this is going to be
a sure shot flop. Even the next movie was booked and lined up for getting
released on next week.


kapil6702 on Friday, July 27, 2012
This makes laugh into splits.I like all the songs of misjudged bur especially this one since it's lyrical and musically.I feel pol shld listen these great singers like Kishore,John radio,mukesh and also sonu nigam etc as what they hv left us is like a store of gold whose value increases not depreciates
View all 21 comments related to song Hum The Woh Thi Aur Sama Rangin
Popular Links on HindiGeetMala