Video of this song from youtube
Average Rating : 4.53
Total Vote(s) : 72
Please rate this song between 1 star and 5 stars (5 stars being the best). Just move your mouse on the stars above and click as per your rating. Your rating will really help us to improve our website. 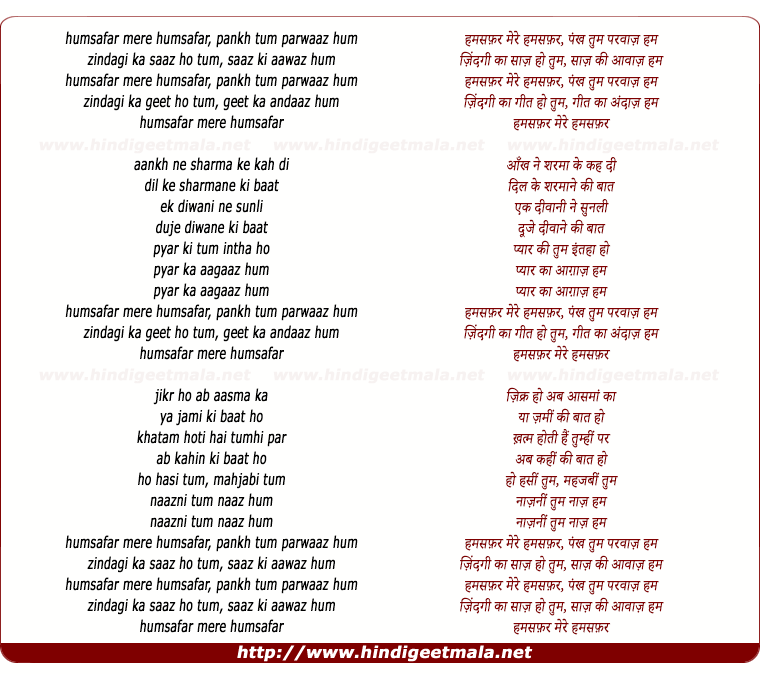 Comments on song "Hamasafar Mere Hamasafar Pankh Tum Paravaaz Ham"
Bharat Gul on Wednesday, March 06, 2013
I have seen chanda and chandni,raag and raagini, saaz and awaaz, and
perhaps even geet and andaaz metaphors in romantic lyrics before, but not
the expression "pankh tum parwaaz hum." While all pairs denote inseparable
mutuality, the pankh and parwaaz usage is particularly novel and lovely to
me. Thanks, Suhanee.

imranzaidi6 on Wednesday, March 06, 2013
Of all the great lyricists of Indian films, Gulzar, like Sahir and RK,
always tries to coin new words or a combination thereof, and employs with
great beauty in his poetry - and in doing so, he not only creates words
that sound sweeter, but makes his message so much lovelier and alluring to
our imagination. This song has all in it that would fascinate anyone with a
heart. Excellent lyrics by Gulzar; Beauty of melody by Lata ji & Mukesh;
And, nostalgic acting by Meena Kumari! Thanks Suhanee!!

imranzaidi6 on Thursday, March 07, 2013
This is in response to numerous queries on my comments by poetry lovers on
my PM. 1) I didn't mean that Gulzar creates 'new' words that aren't in
dictionary; I meant that he coins 'new meanings' to the already existing
words to convey his message. By 'combination thereof', I meant that either
he joins them together, or uses them to compliment each other...like Pankh
& Parvaaz. 2) Yes, other great lyricists also coined new meanings to the
words, but not as creatively as Sahir & RK.

pforpappu on Sunday, September 18, 2011
Have been in search of this song. Just love it. A fav Mukesh and Lata duet
of mine. Thanls so much for this upload. Its very rare to hear such types
of songs nowadays.