Video of this song from youtube
Average Rating : 4.50
Total Vote(s) : 36
Please rate this song between 1 star and 5 stars (5 stars being the best). Just move your mouse on the stars above and click as per your rating. Your rating will really help us to improve our website. 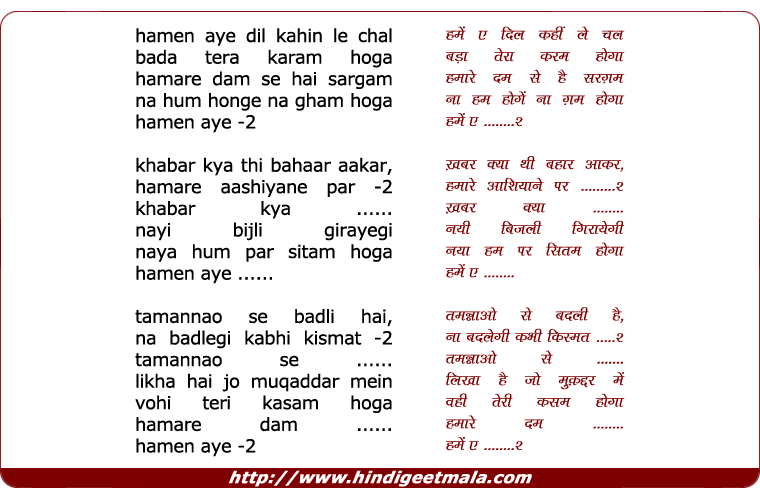 Comments on song "Hamen Aye Dil Kahin Le Chal"
Zil Hasnain Kazmi on Wednesday, January 12, 2011
We had a group of friends who used to sit together and share our thoughts
and discuss about the legends singers of golden old days. I was a little
junior in age among them. One of my friends asked me once that had I heard
this song. My answer was. He than through vistle sung this song. He said it
is very nice song and is not vailable in the market. Time passed and we
seperated. Today after 40 years when I listened it. I have enjoyed it. I am
fond of Mukesh. He was a legend.(12th Jan 2011)

Priya MyMusicalHeaven on Sunday, July 20, 2014
What a soulful rendition by Mukeshji of these Majrooh Sultanpuri words,
as if he was living the pain of the character when singing. ".hamaare
dum pe hai har ghum, na hum honge na ghum hoga", wah, wah to that line !
Roshan's composition is just perfect for such words, he was so capable of
creating sublime tunes. Thanks, Ajay.﻿

apparaoarani on Monday, January 24, 2011
Dear Shah, by reading your comments, I have gone back to 73 summer holydays , at Vizag beach, we also used to sit together and spend till late night in the beach, singing Thalath,Mukhesh ,rafi songs of 50,s and 60,s -Thankyou verymuch-Arani Apparao.-Hyderabad-A.P.
kirti kumar Khanna on Monday, April 11, 2011
ajay sahib ..what a woderfull song This composition is in rag Piloo.mukesh
jee has done extremly well. .SAlute to Roshan sahib for this
copmposition.and last but not the least salute to you sir