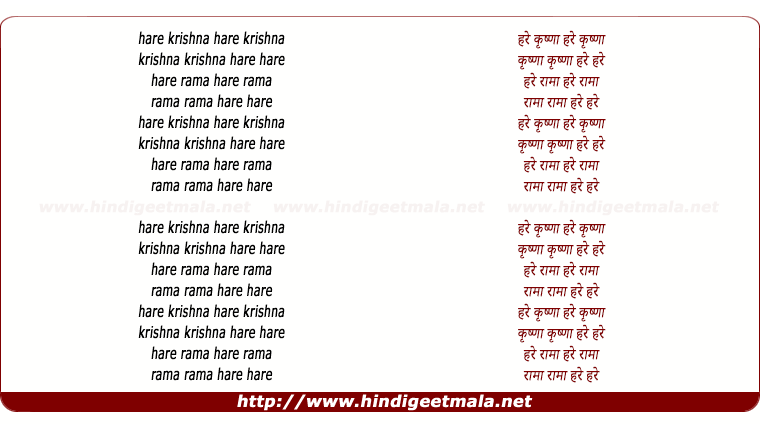 Comments on song "Hare Rama Hare Krishna (Maha Mantra)"
bonbosny on Sunday, July 22, 2012
This is moola mantra.. means main mantra of human born and death.
attachment and detachment. Hare Krishana Hare Krishan Hare Rama Hare Rama
is manta for soul and mind purification. believe me guys... the voice of
Sri Jagjit singh has vey positive vibes. First time i hear this manta with
this tune i mean let my sould my life get expire but only by hearing by
this. Sri Jagjit SIngh Je let your soul remain in peace and you have moksha
or reborn as what u been

CKIUROS on Tuesday, August 03, 2010
Hello there please I'm looking for a video that was been deleted. The only information I have it's:

Dressed by: Sachimata dd. & Chaitanya Lila das. October, Sunday 29, 2007 In the ancient Vaishnava tradition, God (Krishna) is understood to have a personal form that is sacred and worshipable. One of ...

All videos from Sachimata dd. & Chaitanya Lila das was been deleted, can someone help me to find or ask them how to get that song?
THANK YOU VERY MUCH
Haribol

Jai Chandarana on Monday, March 18, 2013
Don't let Maya(the evil devilish powers of this fake life) get to you. Remember Maya, does not want you to achieve salvation(Moksha) and Heaven. It wants to suffer in this horrible and fake cycle of life and death(samsara.) Maya, does this by making people thing God is fake, to make them not focus on religion,god and their route to salvation/Enlightenment.
MrLamizik on Sunday, April 07, 2013
its a fact that many people does not believe god . we r not this material body we r a soul which is full of consiousness about god but it is covered with many things like lust which make us think so. we as humans have got the chance 2 realise god n we r acting like animals . better we were an animal if we want to act like one in this human life
Udaismile on Sunday, June 12, 2011
Hare Krishna. As many times I listen to Maha Mantra song by Jagjit Singhji touches my soul. I find total peace of mind and complete tranquility. May Krishna Bhagwan bless all those who sacrifice themselves in his lotus feet. Hare Krishna, Hare krishna, Hare Krishna Hare Hare, Hare Rama, Hare Rama, Rama Rama Hare Hare.