Video of this song from youtube
Average Rating : 3.95
Total Vote(s) : 37
Please rate this song between 1 star and 5 stars (5 stars being the best). Just move your mouse on the stars above and click as per your rating. Your rating will really help us to improve our website. 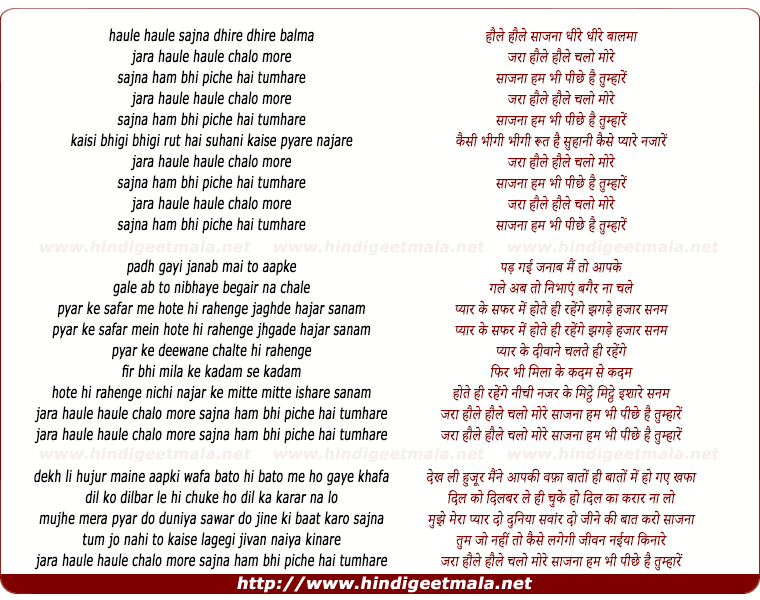 Comments on song "Haule Haule Saajana Dhire Dhire Baalma"
Jagjit Singh Ishar on Thursday, March 11, 2010
@orodental u r right asha bhonsle is thankless & so ungrateful that she
never makes a mention of o p nayyar in any of her programmes. twas o p n
only who was real mentor of asha 2 take her career 2 the himalayan heights.
but she has crammed only r d burman & goes on repeating. even ravi, khayyam
madan mohan & others hv also prefered asha but she never utters a word even
4 them. tho she is highly talented having high calibre & we being her fans
her this negation pinches us.

bambaikababu2 on Tuesday, April 27, 2010
Asha Bhonsle is indeed thankless as she completely avoids any mention of music director OP Nayar who was her mentor. Both Lata and Asha were big manupulators and politicians who never allowed talented female singers to get a foothold in the industry. An example of this manupulatioon is Suman Kalyanpur, who many rate as better than Lata.
Rmehtacpa on Saturday, April 11, 2009
When I bought the record of this song in 1967. I wrote to O.P. saying the
song just brought back the memories of ".Piya piya piya mora jiya..."
1955 hit. He wrote back with how the film world was and the what it took
for a song to get to BINACA geetmala..that was a surprise.