Average Rating : 4.20
Total Vote(s) : 76
Please rate this song between 1 star and 5 stars (5 stars being the best). Just move your mouse on the stars above and click as per your rating. Your rating will really help us to improve our website. 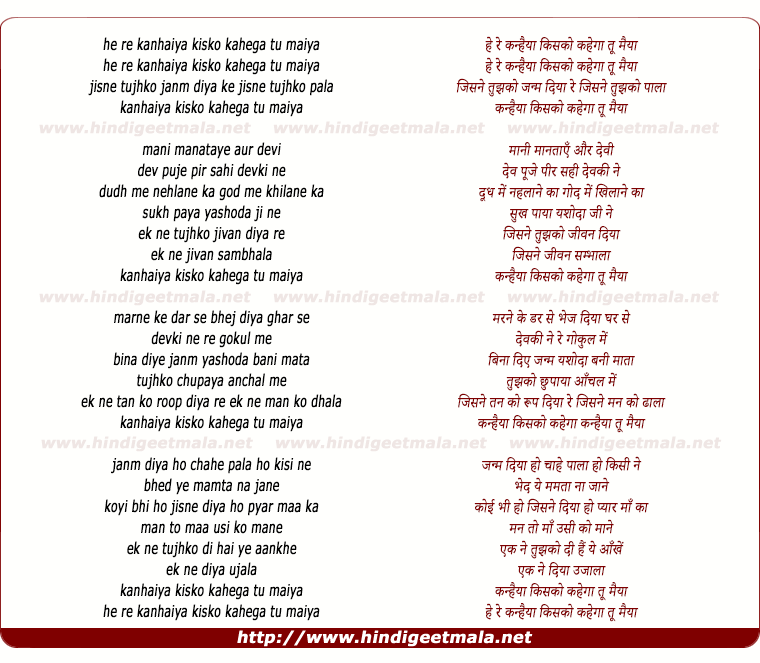 Comments on song "He Rey Kanhaiya Kisko Kahega Too Maiya"
zulfitareen on Sunday, May 13, 2012
this has been my most favourite song since my childhood in india.

it touches my heart every time i listen to it, specially today, it affected me the most since it is mother's day may 13, 2012.

thank you for uploading this beautiful song.

HAPPY MOTHER'S DAY TO ALL THE MOMS OF THE WORLD.

atheist, a friend of all, enemy of none.

jyotish kumar deb on Monday, February 03, 2014
Mr Santom, I think the actor on the sceen (lip synking "Tere Kanhaiya" ) is
none other than our very own ASRANI !﻿

pooranlal on Sunday, March 11, 2012
i believe the man singing the song is Kishore dressed like a Sadhu
MrSantom on Sunday, December 25, 2011
will someone pls tell who is actor,singing the song on screen?
Yahoo! on Thursday, January 17, 2013
nahi !! apko ye kishore lag raha hai ?!
View all 10 comments related to song He Rey Kanhaiya Kisko Kahega Too Maiya