Video of this song from youtube
Average Rating : 4.39
Total Vote(s) : 423
Please rate this song between 1 star and 5 stars (5 stars being the best). Just move your mouse on the stars above and click as per your rating. Your rating will really help us to improve our website. 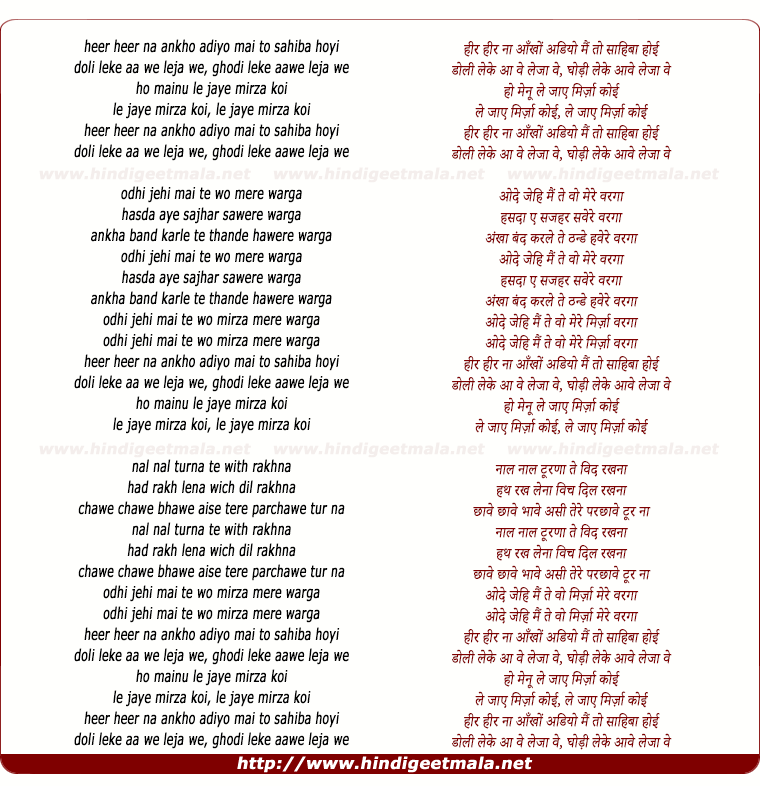 Comments on song "Heer Heer Na Aankho Adiyo (Heer)"
Gypsy Kurl on Friday, December 05, 2014
To understand this song you need to know two historic/tragic love stories.
One is Heer Ranjha's and other is of Mirza-Sahiba's.

Heer Ranjha: Heer a beautiful women who fell in love with Ranjha and later
she was forced to marry another man called "Saida Khera" and the marriage
happned.
and heartbroken Ranjha becomes Jogi and wanders.

Mirza-Sahiba: Mirza fell in love with Sahibaa, When, later in life, Sahiban
was to be wedded forcibly to Tahar Khan, But Mirza arrives on his Bakki
(the name of Mirza's mare) during Sahiban's mehndi ceremony and carries her
away.

SO NOW in this song the Girl doesn't want to be called Heer. She Says:

Abhi Pise on Sunday, June 16, 2013
Heer is a song that takes into account the stories of Heer-Ranjha,where
Ranjha left his beloved to get married to another suitor in the
beginning,and Mirza-Sahebaan,where Mirza tkes his beloved on a horse.n so,
in the song,the girl wants to be called Sahebaan instead of Heer,even
though Mirza and Sahebaan die at the end of story..so songs like
this..Don't call me Heer, o friends, I've become Sahibaan I hope he comes
on a horse and take me away, I wish some Mirza comes for me and takes me
away..

Raghav K on Saturday, October 25, 2014
initially i hated this song.. but this song is awesome.. no no dont tell
me that typical-rahman-fan comment... slow poison and all. there are lot
other songs which you hate initially but then you start loving it ...
Rahman has lost his original touch is a fact.
Note: I am a hardcore fan of 90s-Rahman. i think that the 90s-Rahman is the
only god gifted musician across the globe..
I wish he creates his old magic like Thiruda Thiruda, Jeans, Taal﻿

avik mitra on Sunday, April 14, 2013
Heer is Juliet & Ranjha is her Romeo. Set in rural Punjab where women were
the pride and honor of the martial Punjabi clans, it was strictly forbidden
to romance and if the relationship was not approved, eloping could be a
possibility, however with fatal consequences. The girl, Heer has been
shedding a tear waiting patiently for her lover to return.