Video of this song from youtube
Average Rating : 4.21
Total Vote(s) : 14
Please rate this song between 1 star and 5 stars (5 stars being the best). Just move your mouse on the stars above and click as per your rating. Your rating will really help us to improve our website. 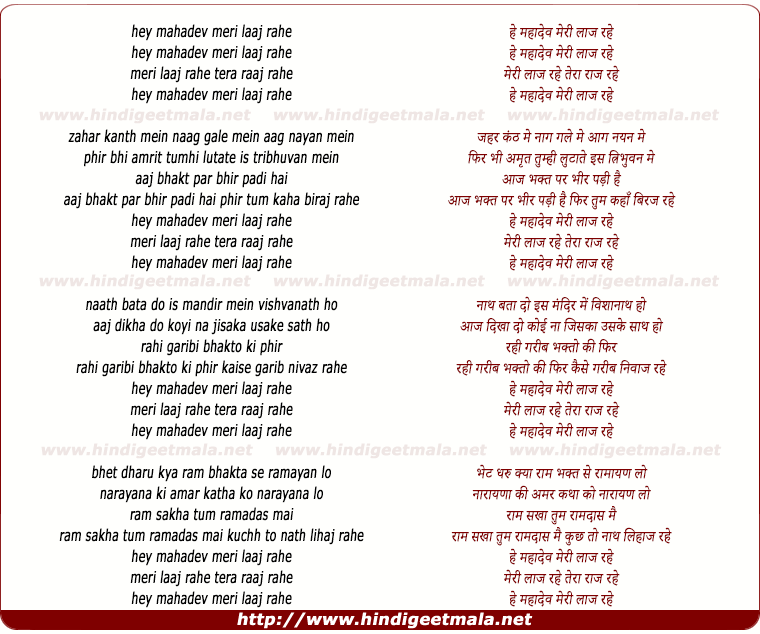 apoorva bhatt on Thursday, August 05, 2010
Can somebody imagine the caste and creed of Rafi saab ? A living Demi God
on earth. After hearing to this voice I feel like not listening to any
other singer .

chandru sadarangani on Saturday, February 05, 2011
wow!! its all rafi saheb again. he has done 120% justice to nearly all the
bhajans he has sung. thanks for this gr8 upload.

grnarayana on Saturday, August 21, 2010
Great Rafi saheb sang four Hindi Bhajans for the Kabir role-player in a Telugu film called "Bhakt Ramadas" produced by veteran producer-actor Chittoor Nagayya! When the actor was facing financial hardships all singers and actors contributed their participation for the film without taking any remuneration! Having come to know of it Rafi saheb also did not take his remuneration and not even flight charges !That great was Rafi saheb! When HMV wanted the songs, Dr. KV Rao of Hyderabad gave to them!
Manju Sinha on Friday, January 04, 2013
What a great composer--Mr. Chitragupta, and what a singer the great Moh.
Rafi. Thanks a lot for uploading songs from the film 'Tulsidas'. Not to
forget the Lyricist, great talent.