Average Rating : 4.50
Total Vote(s) : 6
Please rate this song between 1 star and 5 stars (5 stars being the best). Just move your mouse on the stars above and click as per your rating. Your rating will really help us to improve our website. 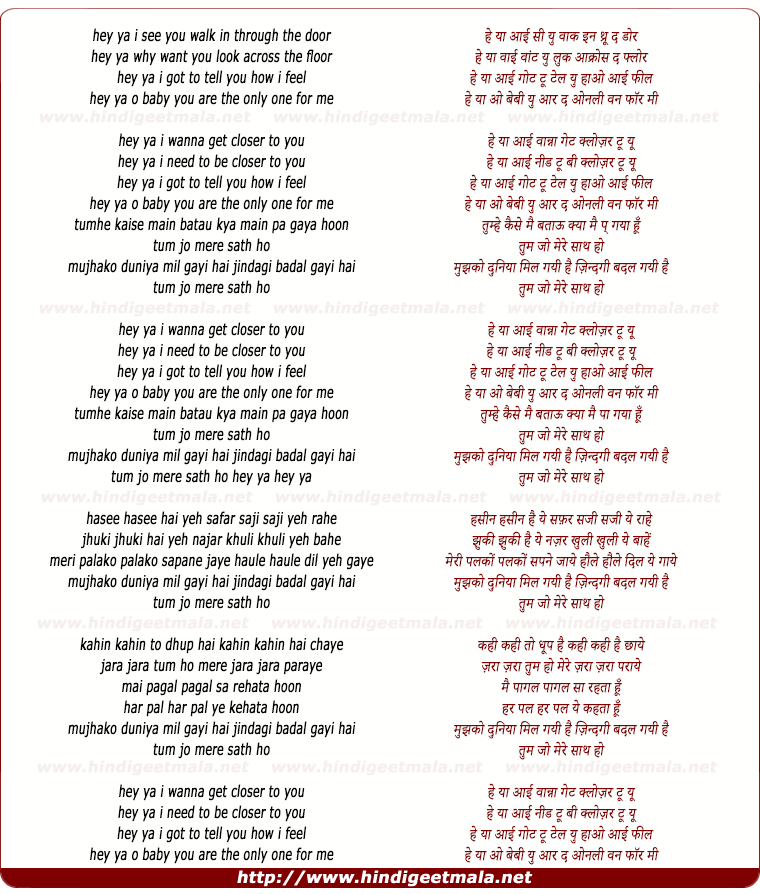 Comments on song "Hey Ya I See You Walk In Through The Door"
mintyblue1985 on Sunday, February 07, 2010
A.R. Ranhman has gone down d drain.He is no longer that great. AN di'm tired of him receiving awards. Give the new gneration a chance like Vishal shekhar, shankar ehsaan loy n pritam. Actually they are not even the younger genration they are genration X. But ar Rahman is OLD.
mintyblue1985 on Sunday, February 14, 2010
@hrthya

This music is composed by Shankar Ehsaan Loy and taht's why I am listening to it. Obviously I don't listen to overrated ppl like AR Rehman

myfree77 on Sunday, April 24, 2011
Farhan!! is ray of hope for the indian film industry. B&W movies were quite sensible (except song/dance & aping the west). Art movies were just amazing but low budget and sort of died out. Very few commercial ones are enjoyable and his movies seem to have a balance between too real/boring and too commercial/crap. I hope the commercial movies get more of the 'art' factor in them! His movies have a hope - Luck by chance, Lakshya and Karthik had that. I wish him all the best.
kadathia on Monday, February 22, 2010
the character of farhan in this movie is not manly. he s nt takin d lead as deepika s doing. in dancing she s on his back rather thanï»¿ him takin her on dance floor. guy shud b a man in aï»¿ relationship. i dunno if director knowingly shot the movie, considering this. does this character represent the present indian man ?!? nope
Edgy Films on Wednesday, February 17, 2010
Dont compare ARR with any other music director.. ARR music is divine
music.. for example::.. Increase ur volume to max and listen ARR song and
other song.. onething u ll observe.. that no matter wat the volume is, ARR
song offers u same soothing and divine feel.. but its not the same wid
other songs..