Video of this song from youtube
Average Rating : 3.80
Total Vote(s) : 30
Please rate this song between 1 star and 5 stars (5 stars being the best). Just move your mouse on the stars above and click as per your rating. Your rating will really help us to improve our website. 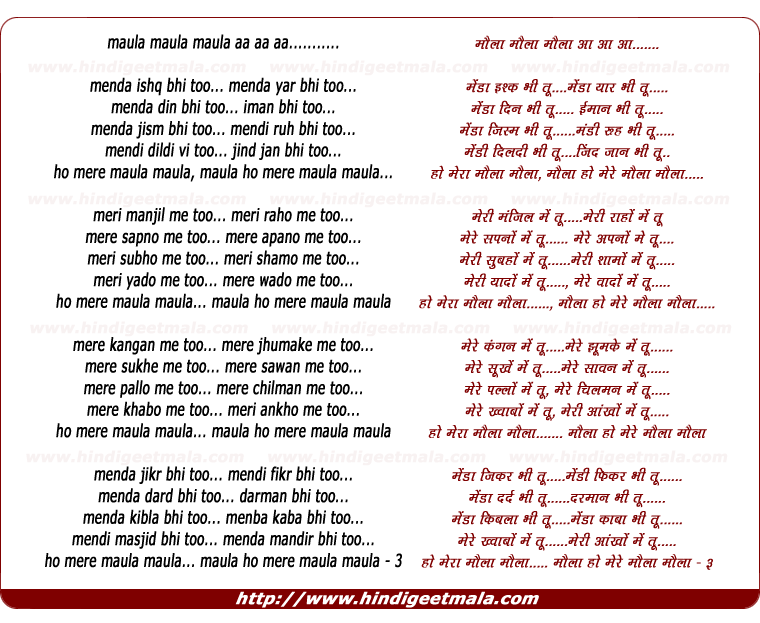 Comments on song "Ho Mere Maula Maula"
momeaiz on Monday, April 25, 2011
In my sight, it's the great spiritual song. And I must say that this kind of song should have been placed in some good movie unlike Awarapan .Moreover was filmed on a very vulgar guy. Rafaqat is any way a good singer. He must be given more opportunities to show his talent.
Kinzer1000 on Thursday, April 21, 2011
how can someone dislike this song.!!! even a stone will be filled with emotions after listening to this song...great composition.!!! Just love this song.. makes the corner of eyes wet and melts my heart.!!!
raja92ali on Monday, February 01, 2010
well for your kind information (Menda ishq is from Siraiki and sindhi language) and in punjabi its Mera.
i love his voice and his Rafaqat Ali Khan for people who are not aware of his name

firas4li on Thursday, August 06, 2009
I don't like the punjabi bits it makes it sound really paindu. Ursu zaabaaan all the way!
traumaize on Sunday, August 16, 2009
even i dont like some lyrics of this song but this song gives me energy
View all 34 comments related to song Ho Mere Maula Maula
Popular Links on HindiGeetMala