Video of this song from youtube
Average Rating : 4.35
Total Vote(s) : 52
Please rate this song between 1 star and 5 stars (5 stars being the best). Just move your mouse on the stars above and click as per your rating. Your rating will really help us to improve our website. 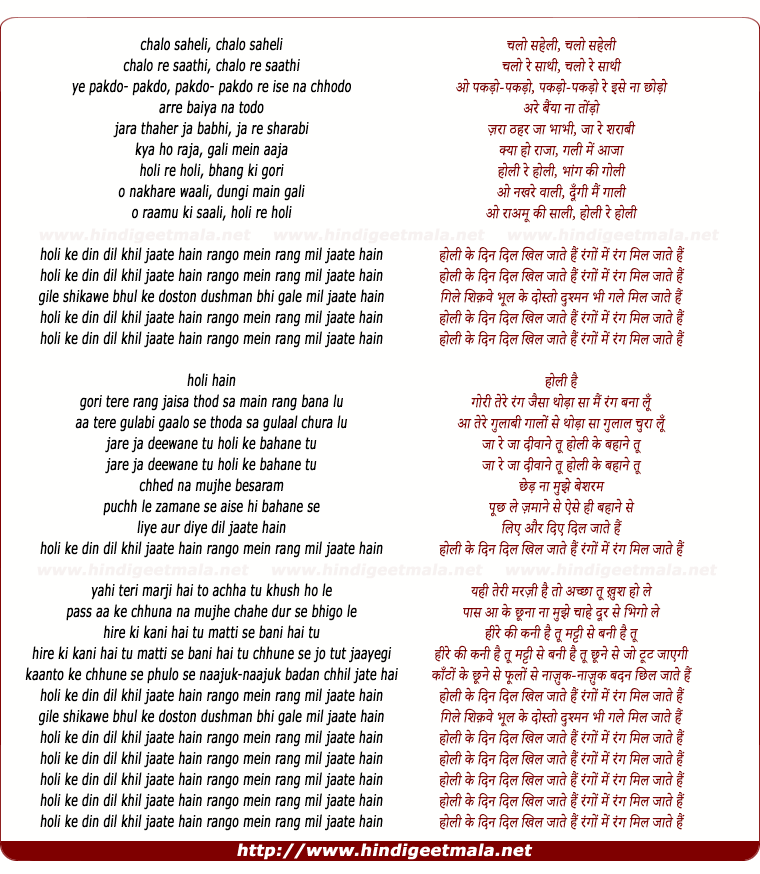 Comments on song "Holi Ke Din Dil Khil Jaate Hai"
armitastic on Wednesday, March 25, 2009
The character of Basanti - in addition to the film "Sholay" - was one of the incomparable highlights of Hema's characters. For one, she was set to portray the role of a tangewali - the very first of its kind, as was/is Hema the person herself. On the other hand, "Sholay" was the longest-running western - AND THE FILM - in the entire nation of India at the time, only to be replaced by "Dilwale Dulhaniya Le Jayenge" in the later years. With every Basanti's move, bolts of energy sparked everywhere!
armitastic on Wednesday, March 25, 2009
When you have this much beauty, this much energy, and cuteness appeal dancing so spontaneously right in front of you, would you ever take the time to ponder upon its validity: whether you two will make the couple of all couples? Obviously not - and that is exactly what was in Veeru's mind at the time, as he took no extra moment and started chasing his princess. The king needed his equal partner in a queen, which he found in Basanti, as they ruled the world - and, eventually, cinema!!!!
armitastic on Wednesday, March 25, 2009
Veeru, with his white shirt, black band tied around his waist, and the most disordered hair leave no doubt as to why he's one of the most notorious characters in all of Indian cinema history. As he transformed from a detrimental prisoner, to a courting gentleman, he marked a special place in cinema history - and in the hearts of his countless audiences. Basanti and Veeru make one of the most special and lovable characters/couples in the entire world!!
Narendra Shah on Friday, March 11, 2011
Almost all the dialogues of this movie are unforgettable.From Kitne
aadmi they to Yeh Sannata Kyun Hai Bhai to Tumhara Naam Kya Hai Basanti To
Koi...Purani Dushmani To Bhag Dhanno, Basanti Ki Izzat Khatre me Hai, Aadhe
Idhar, Aadhe Udhar, Baki Sab Mere Saath, Angrez Ke Zamane Ke
Jailor...and one masterpiece just before this song which has
Gabbar mouthing..." Holi Kab Hai, Kab Hai Holi" !!!!!!!!!!!!!

armitastic on Wednesday, March 25, 2009
My personal favorite holi number/hit!!! Thank you so much, anupisgreat, for such an incredible upload of two of India's most loved artists - and my all-time favorites:) Very kind of you!!! :)
View all 13 comments related to song Holi Ke Din Dil Khil Jaate Hai
Popular Links on HindiGeetMala