Video of this song from youtube
Average Rating : 3.67
Total Vote(s) : 6
Please rate this song between 1 star and 5 stars (5 stars being the best). Just move your mouse on the stars above and click as per your rating. Your rating will really help us to improve our website. 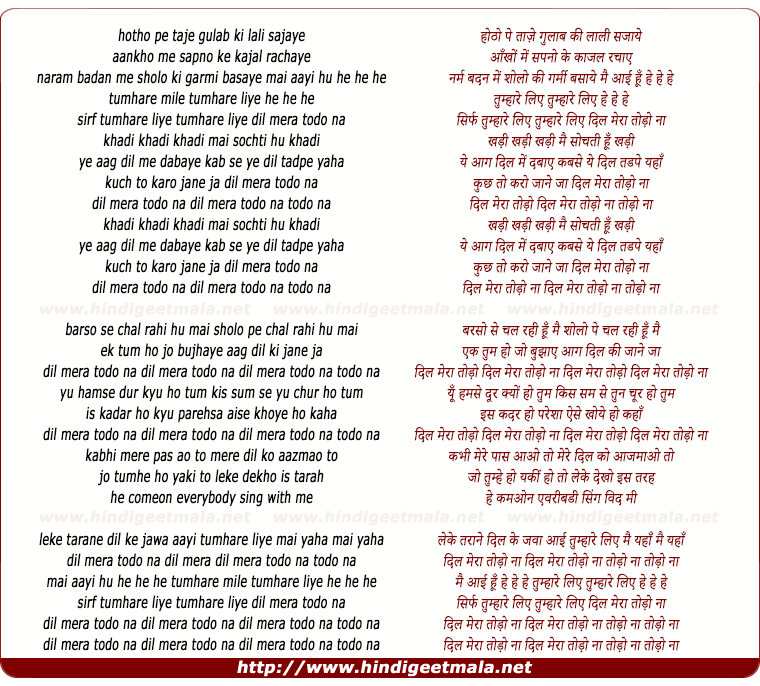 Comments on song "Hotho Pe Taaje Gulab Ki Laali Sajaye, Dil Mera Todo Na"
Sam3583 on Sunday, March 25, 2012
Still a classic song,even as i gotten older,,
Chirag G on Saturday, August 13, 2011
hey all music lovers, This song is @ least 10 yrs ahead of its time in the
tempo, music composition, usage of instruments, rendition as well as
mixing. The song has been sung by the versatile and unique alisha chinai
and composed by the gr8 Bappi da. Of course, this song is not an original
indian composition or music beat but inspired by an MJ song.

AJBluesman on Tuesday, November 02, 2010
The song was ahead of its time lol. The chroegraphy and the background set
and inanimate crowd plain makes me dizzy !! Alisha rocks and Bappi sure has
some genuine talent even though many folks bash him ! Come on ppl Give him
his due !

kiki8304 on Monday, November 01, 2010
Wow I have seen this movie into Russian, and they've cut so much part from
this song. That's why movies shall be seen into their original language. I
like Mandakini, Dance-Dance Mandakini all of your life!!!