Video of this song from youtube
Average Rating : 4.34
Total Vote(s) : 58
Please rate this song between 1 star and 5 stars (5 stars being the best). Just move your mouse on the stars above and click as per your rating. Your rating will really help us to improve our website. 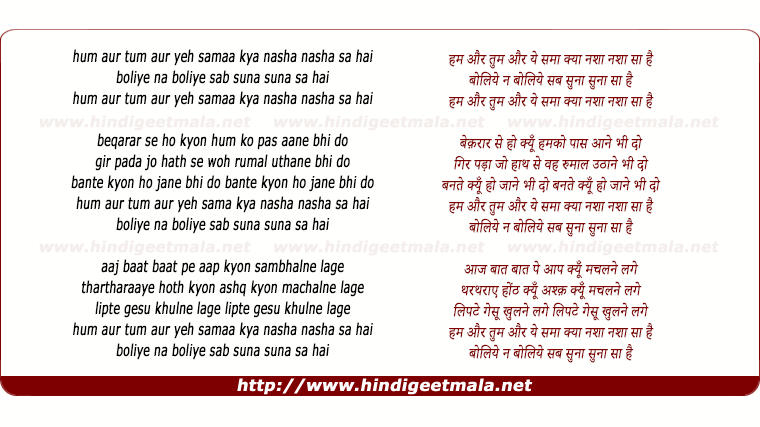 Comments on song "Hum Aur Tum Aur Ye Sama"
Naveen Dighe on Monday, May 04, 2015
THIS IMMORTAL RAFISAHAB NUMBER FOR SHAMMIJI WAS CREATED BY THE HUGELY
TALENTED USHA KHANNA IN HER VERY EARLY DAYS USHAJI INSPITE OF HER GREAT
TALENTS WAS NEVER GIVEN HER DUE﻿

Maaz Shaikh on Sunday, November 06, 2011
@rajeshvarma63 His effortless flair was definitely inimitable and his way
of style (clothes, gestures etc.) were decades ahead of his time... A
completely free actor and a monster of a talent capable of doing far better
roles if only he had the opportunities... My FAV actor and a gr8 human
being! lots of love and respect for the LEGEND of Indian cinema...

rajeshvarma63 on Thursday, August 25, 2011
The most gorgeous looking man ever to appear on Hindi screen sings one of the most romantic songs . My God , heroes of today look ordinary infront of this man, what style ..what flamboyance he had !
Sunil Mehta on Saturday, June 21, 2014
This song truly out of the world. Very mesmerizing and velvety too. The
great song from one of the alltime best indian singerand by a great
handsome Shammiji﻿