Video of this song from youtube
Average Rating : 4.21
Total Vote(s) : 274
Please rate this song between 1 star and 5 stars (5 stars being the best). Just move your mouse on the stars above and click as per your rating. Your rating will really help us to improve our website. 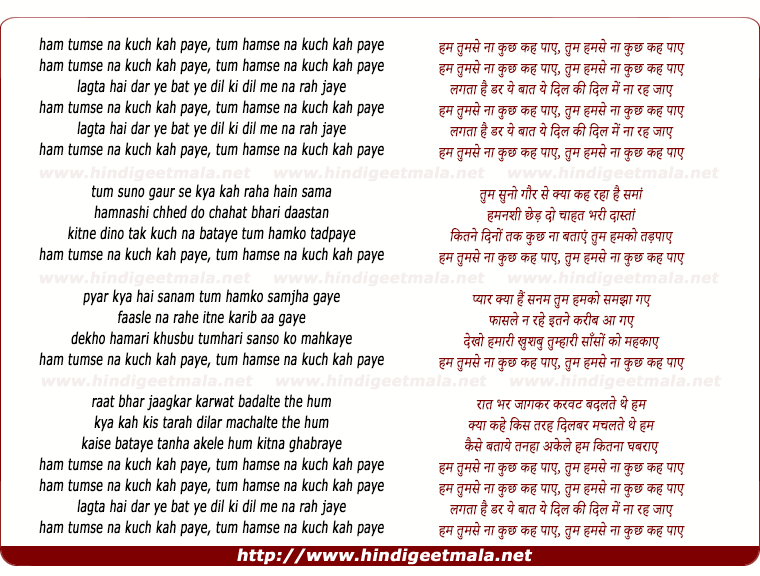 Comments on song "Hum Tumse Na Kuch Keh Paye"
salmansgirl on Sunday, December 28, 2008
thats actually not true. Salman and Katrina are madly in love, they've been
together for over 4 years now. She has not said no to his proposal, nor has
he actually proposed to her, but he would like to get married to her.
According to Arbaaz and Sohail, she's already part of the family...and they
will make it official when they feel the time is right for both of them.
Plus knowing Salman, he might not get married for another 10 years lol!

Zaara1344 on Saturday, December 27, 2008
As far as I know, Salman does wanna get married with his current girlfriend
Katrina, but she isn't ready to get married to him. I also heard rumors
that Katrina is praying that Salman fall in love with someone else, I don't
know how far it's corrent

Javed Shah Afridi on Saturday, July 04, 2009
Darr kia dil ki baat dil main hi reh gayi. Amazing song yaar now a days i
am in a situation like the singers are singing in the song. Love this song
Hariharan is an amazing singer. Thanks buddy for uploading this song.

salmansgirl on Tuesday, December 23, 2008
she never married Akshay Kumar. She only got married once and thats to
Anil, her current husband. Who's also a bollywood producer. Akshay only
married to Twinkle Khanna. Before twinkle, he dated Shilpa Shetty. :)