Video of this song from youtube
Average Rating : 3.00
Total Vote(s) : 4
Please rate this song between 1 star and 5 stars (5 stars being the best). Just move your mouse on the stars above and click as per your rating. Your rating will really help us to improve our website.

here in the dark, in these final hours
i will lay down my heart
i'll feel the power
cause i can't make you love me

cause i can't make

cause i can't make

here in the dark, in these final hours
i will lay down my heart
i'll feel the power
cause i can't make 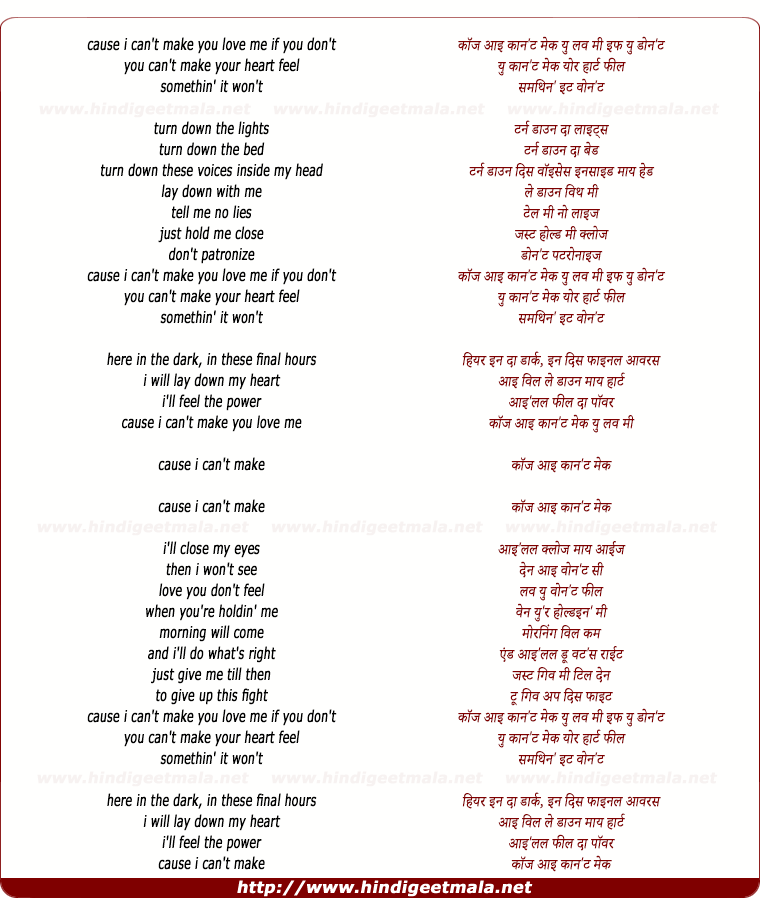 Comments on song "I Can't Make You Love Me"
Akta Patel on Saturday, July 25, 2015
people who not actually appreciating her talent and work , they are really
jealous of her ..she perfect combination of talent , hard work and good
looking.if you can't appreciate then why are you bother to reply on her
video even guys..she's fabulous and that fact never gonna be change by
saying some negati vve things about her.guys so look at yourself what
you have done and look her ...you guys will realize every
truth.jealous people.﻿

HARRY SANDHU on Monday, April 27, 2015
Just one thing..On one hand..while the whole world(where no one knew her
before) is busy praising Priyanka for her Singing,Acting n her 'Exotic
beauty' (and they generally don't 'accept' any foreigner so quickly!)..We
indians here are busy writing the hate comments and that too for no reason
at all!!!
Indians..She's making us PROUD out there! It's time to be with her n
SUPPORT HER! Go PeeCee! RISE AND SHINE :)﻿

Ajit Sharma on Wednesday, October 29, 2014
Simply would like to say.Awesome PC...let the people criticize and
making rumors on you...you have done fabulous work...to do this needs so
much talent dare and hard work. People just take a moment to speak about
others gives comments and judge which they don't have right to do
so..first prove what you r and then give judgment about others...﻿

Sarah Johns on Wednesday, September 17, 2014
I like Priyanka very much, especially as an actress, but I think here she
is trying to much - i mean it looks a bit copied like every second american
mtv video clip, I think she should sing in hindi or more soulful songs, but
still I congratulate her - she has achieved so much.﻿