Video of this song from youtube
Average Rating : 4.17
Total Vote(s) : 41
Please rate this song between 1 star and 5 stars (5 stars being the best). Just move your mouse on the stars above and click as per your rating. Your rating will really help us to improve our website. 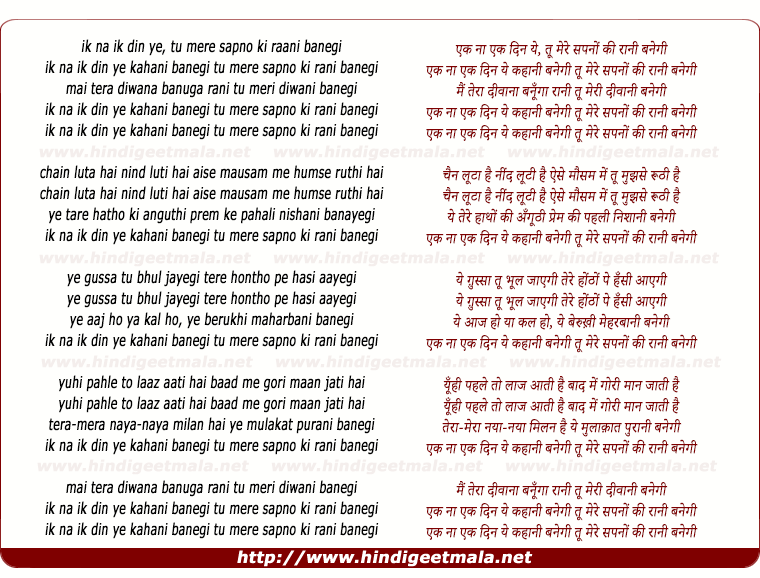 Comments on song "Ik Naa Ik Din Yeh Kahanee Banegee"
milinddabke on Saturday, December 19, 2009
folks, let us understand that both rafisaab and kishoreda are legendary singers, one trained and melodious, other gifted and melluflious, and no one else in the world, repeat the world, can come any where close to them
ansab1 on Thursday, May 07, 2009
There was & is only ONE & the Great Mohammed Rafi - His like will Not be seen again. He was the NINETH Wonder of the World. His name will live forever in the annals of the Music industry.
russelindia on Saturday, September 19, 2009
Ur dead right..Rafi is teh greatest and no one can match him...he si better tahn the fairy tale singers like kishore and mukesh by million of light years..
Tanyalysha on Sunday, July 25, 2010
"Tu mere sapno ki raani banegi", an uncommon confidence on love. And this word make this song more meaningful, Thanks for uploading this one here.
armaankhan220 on Thursday, November 05, 2009
i was looking for this song for a long time.
Mohd Rafi's songs changes my mood...it makes me refreshing. thankyou rajshri and YOUTUBE