Video of this song from youtube
Average Rating : 4.26
Total Vote(s) : 97
Please rate this song between 1 star and 5 stars (5 stars being the best). Just move your mouse on the stars above and click as per your rating. Your rating will really help us to improve our website. 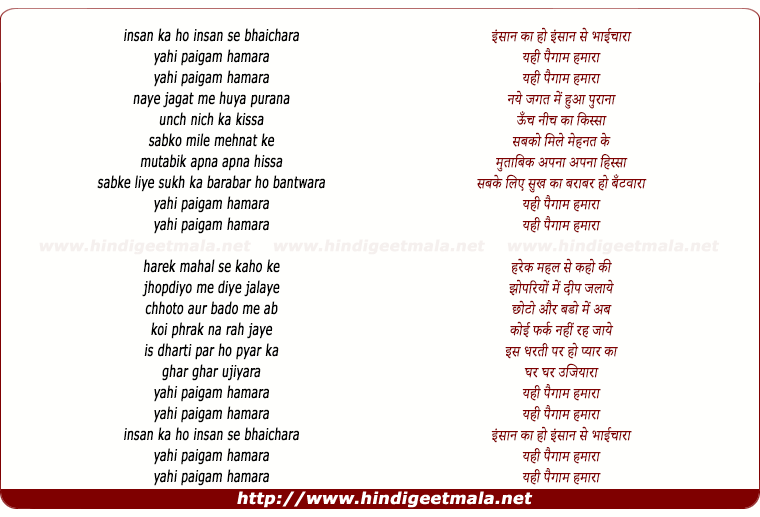 All the best to all patriotic AAM ADAMI.

Devendra Singh on Wednesday, September 09, 2015
Nice song giving a great message of humanity. Kavi Pradeep was a great poet
and he had poetic thoughts of love, sacrifice, dedication towards the
nation always floating in his mind. Anna Jee superbly gave air to his
poetic feelings through his loving composition by using Manna Da's
classical voice. It's really great.﻿

Vaibik on Saturday, December 28, 2013
I came to listen to this GREAT song after watching Mr. Arvind Kejrival's
swearing-in ceremony.
Grateful to the Kavi (poet/lyricist), Singer as well as to those who
reminded today about what is the country calling for.﻿

Truth Bytes on Saturday, December 28, 2013
I also came to hear this song only after hearing Mr Arwind Kejriwal sing it
at his swearing in ceremony. AAP ko best of luck!! If they succeed politics
will no longer be a dirty word!﻿

Dinesh Menon on Saturday, December 28, 2013
Kejriwal should have sung the second stanza " naye jagat mein hua --- sab
ko mile mehnat ke mutabiq apna apna hissa---" too. Anyway he is the only
ray of hope for our country. ﻿