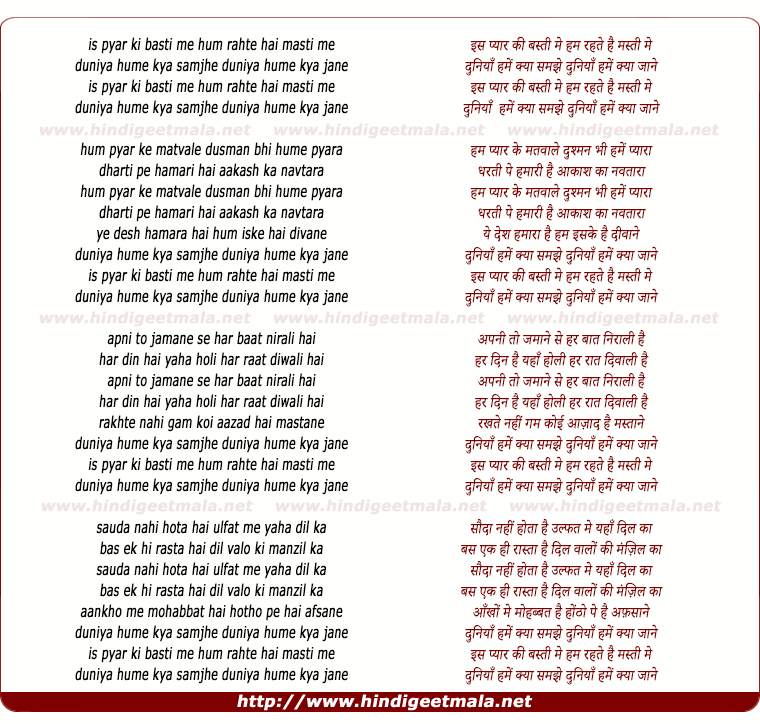 Comments on song "Is Pyar Ki Basti Me"
Punam Taneja on Thursday, September 20, 2012
Hi Jagjit, Thanks for the appreciation. Heroin - Sheila Ramani, Hero -
Anwar (though on the Screen in this song). However, I am giving all the
details below. Also please see other songs posted by me from Taj and Jungle
King - on the site punam964 - they are also very melodious !! JUNGLE KING
(1959) ANWAR, SHEILA RAMANI, PRAMILA, MANJU, TUNTUN Produced By: ARTISTES
UNITED Directed By: MASOOD Music By: BIPIN BABUL ACTION **

Vicky S on Saturday, April 19, 2014
Male singer is Kabban Mirza who sang 2 other melodious songs in Razia
Sultan before he got throat cancer. A unsung singer, was a radio announcer
:(﻿

Jagjit Singh Ishar on Sunday, September 16, 2012
Heard for the 1st time. Very sweet & melodious. Who are the hero heroin in
the movie.

kiran bhandary on Friday, November 18, 2011
Lively and lovely ! Suman Kalyanpur sounds so sweet...
60arvind on Sunday, August 07, 2011
a heard and forgotten beauty. thanks a lot
View all 7 comments related to song Is Pyar Ki Basti Me
Popular Links on HindiGeetMala