Video of this song from youtube
Average Rating : 4.33
Total Vote(s) : 1067
Please rate this song between 1 star and 5 stars (5 stars being the best). Just move your mouse on the stars above and click as per your rating. Your rating will really help us to improve our website. 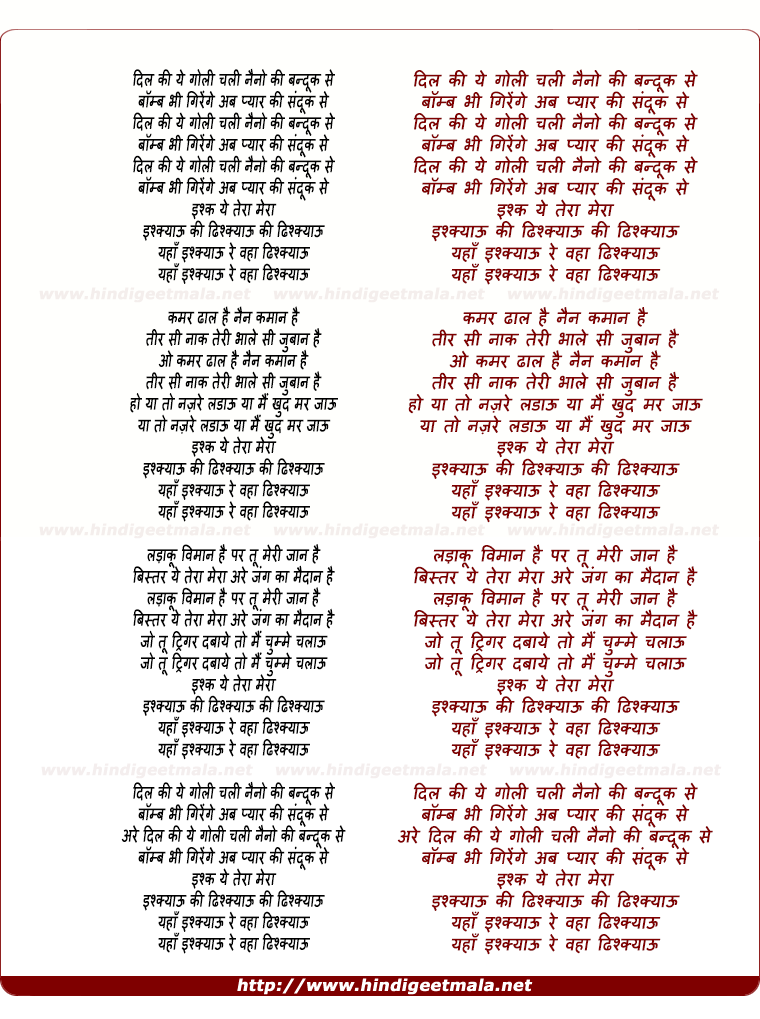 Comments on song "Dil Ki Ye Goli Chali"
Ssookawai on Tuesday, October 22, 2013
It reminds of Bollywood good songs of the nineties!! Sanjay Leela Bhansali
remind us of the meaning of Bollywood! Thannnnk you so much and great cast,
thank God Katrina Kaif and Kareena Kappor didn't accept the role! Deepika
is the perfect choice! Many people criticize Ranveer because of his
attitude but that same attitude makes him hilarious and... very gentle, he
doesn't look like a pervert, he's a crazy guy having fun...people just need
to chill! I'll watch it when I'll go to India! ♥♥♥♥

delon a on Saturday, November 23, 2013
I have not been so impressed with an Indian movie since Kammal Hassan Hey
Ram,yes I know ,completely different genre. This movie was amazing , from
the sets ,to the costumes to the two absolute gorgeous lead actors. I had
never seen Ranveer Singh before and what a revelation. A pitch perfect
balance acting of typical masala hero and a tragic lover. And Deepika ,the
most beautiful and talented actress in my life time,I am forty! The best
adaptation of Romeo and Juliet of modern era.﻿

Bruno'sBaBySquirrel on Tuesday, October 15, 2013
The song is amazing. But OmG! This movie must be really good, and thank
god! Finally brilliant choreography It tells a story, shows emotion and
isn't the masala tapoori dance that I see in every movie. No random stuff,
just well executed and choreographed dancing. Love it!

Rashmi N M on Saturday, October 19, 2013
When I first heard this song, I knew it would be shot in this way itself n
it's exactly picturised as per my vision.. It's shot rather in aesthetic
manner rather than vulgar way. If people still consider it as vulgar,
then just dont watch it.. It wont stop the movie from being a huge
blockbuster as far as there are people who know the beauty of it... U guys
better watch movies like Grand masti types... This type of movies doesn't
suit U..