Video of this song from youtube
Average Rating : 4.07
Total Vote(s) : 187
Please rate this song between 1 star and 5 stars (5 stars being the best). Just move your mouse on the stars above and click as per your rating. Your rating will really help us to improve our website. 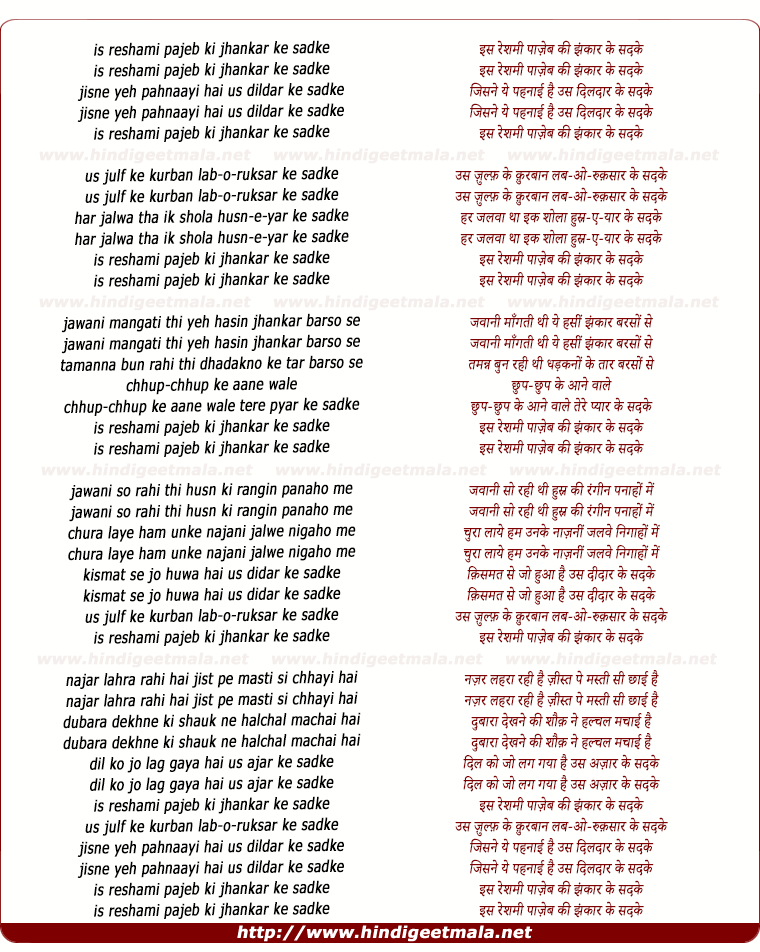 Comments on song "Iss Reshami Pajeb Kee Jhankar Ke Sadake"
RealMusicKing on Tuesday, July 19, 2011
In early 1970's jackals RD Burman and Rajesh Khanna conspired to promote jackal Kishore Kumar while at the same time, bring Rafi down. With the songs of Laila Majnu, Madan Mohan brought back Rafi to the spotlight once again. In other words, Lion Madan Mohan helped a fellow Lion, Rafi and chased away all the jackals. Hats off to both of you!
RealMusicKing on Wednesday, March 14, 2012
You were the hair between jackal Kishores butt. Though never noticed even by your mentor, jackal Kishore, but you were always there. : )
imransiddiqi on Tuesday, March 13, 2012
yes both were all time legends but Rafi was not down he was forced to down and i think lata jee also played a vital role in his down as she boycott duet with him and he came back with full force when he got a slight chance and after laila majnu amar akbar anthoni & hum kisi se kam nahi he is again number one Mind u Kishore is great but rafi saheb is matchless no can match his brilliance!...
786maq on Sunday, June 10, 2012
Superbas lyrics... Superb film.. Superb singers. Wah Rafi Saab wah yo and Lataji will always be the best duet singers. Both of you are and will always be legends.
vinod mehru on Sunday, September 04, 2011
pehli baar film dekhi to gaane achhe lage, phir second time dekhito bhi achhi lagi, 3rd time onwards se bajuwale ko kaha bhaiya gaana aaye to utha dena
View all 15 comments related to song Iss Reshami Pajeb Kee Jhankar Ke Sadake
Popular Links on HindiGeetMala