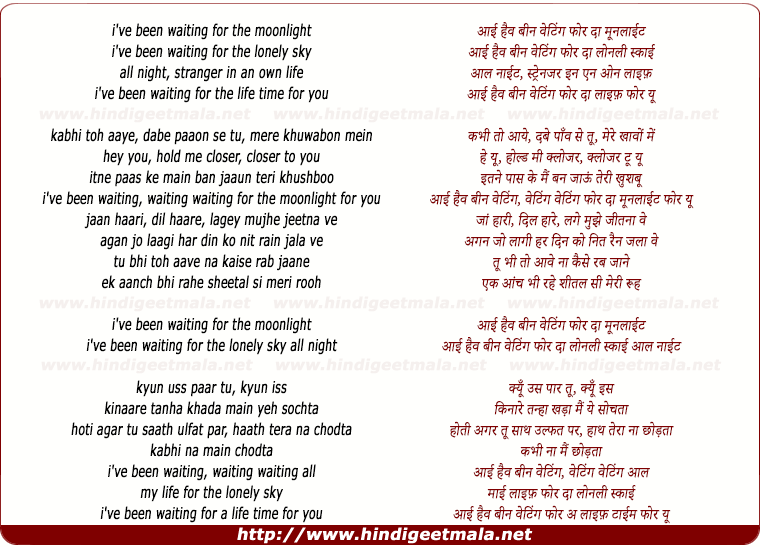 Comments on song "I Have Been Waiting For The Moonlight, Kabhi Toh Aaye Dabe Paaon"
ganesh19991 on Sunday, January 30, 2011
@aatha75 jazz genre songs are all of same type the main thing is improvisation, if you follow the jazz genre you will know there are 1000s of songs like these which follow the same pattern, even before the nat kings unforgettable, just think before making such a comment, arr is a world renowned composer if these song was composed in some hollywood movie arr international fan following would have shot sky high instead arr gave these music in indian movie where audience are cant accept jazz
ad75093 on Thursday, August 02, 2012
This is a beautiful song. Vijay yesudas sung it amazingly superb. It beat
hollywood songs. some guys don't even know Vijay is a multi language singer
and he had several hits in last year. listen to his EE puzhayum, akelayo,
nee paartha, Oru madhurakinavin re mix, latest mazhakondu mathram spirit
film song. he sang beautiful songs in Kannada too. there are several songs.
Vijay is doing super since 2007. What a golden voice and feel!

ganesh19991 on Sunday, January 30, 2011
@dinesh2002 I agree with you. no other composer has used jazz in indian cinema maybe except few old mds, like arr.maybe because indian audience is still not prepared to accept these genre because of their lack of knowledge they just want same dance numbers ,one of these reasons JHS is not a popular album even though it is musically a class act.
ganesh19991 on Sunday, January 30, 2011
@aatha75 you dont have to be a fan of anyone to differentiate between genre coincidence and plagiarism you just need to have some common sense. If you love arr music than respect it, plagiarism is a sensitive issue use such commets only if you find something direct like pritam, or other composers.
azhar bhai on Tuesday, November 09, 2010
Wow awesome .speechless...Great composition..AR Rehman..and
excellent rendering from the singer Vijay Yesudas...Guess he is a new
singer but his singing style is apt for the song ...donno much abt him ...I
Guess this is his first song...but hats off to ARR & Vijay

View all 20 comments related to song I Have Been Waiting For The Moonlight, Kabhi Toh Aaye Dabe Paaon