Video of this song from youtube
Average Rating : 4.50
Total Vote(s) : 115
Please rate this song between 1 star and 5 stars (5 stars being the best). Just move your mouse on the stars above and click as per your rating. Your rating will really help us to improve our website. 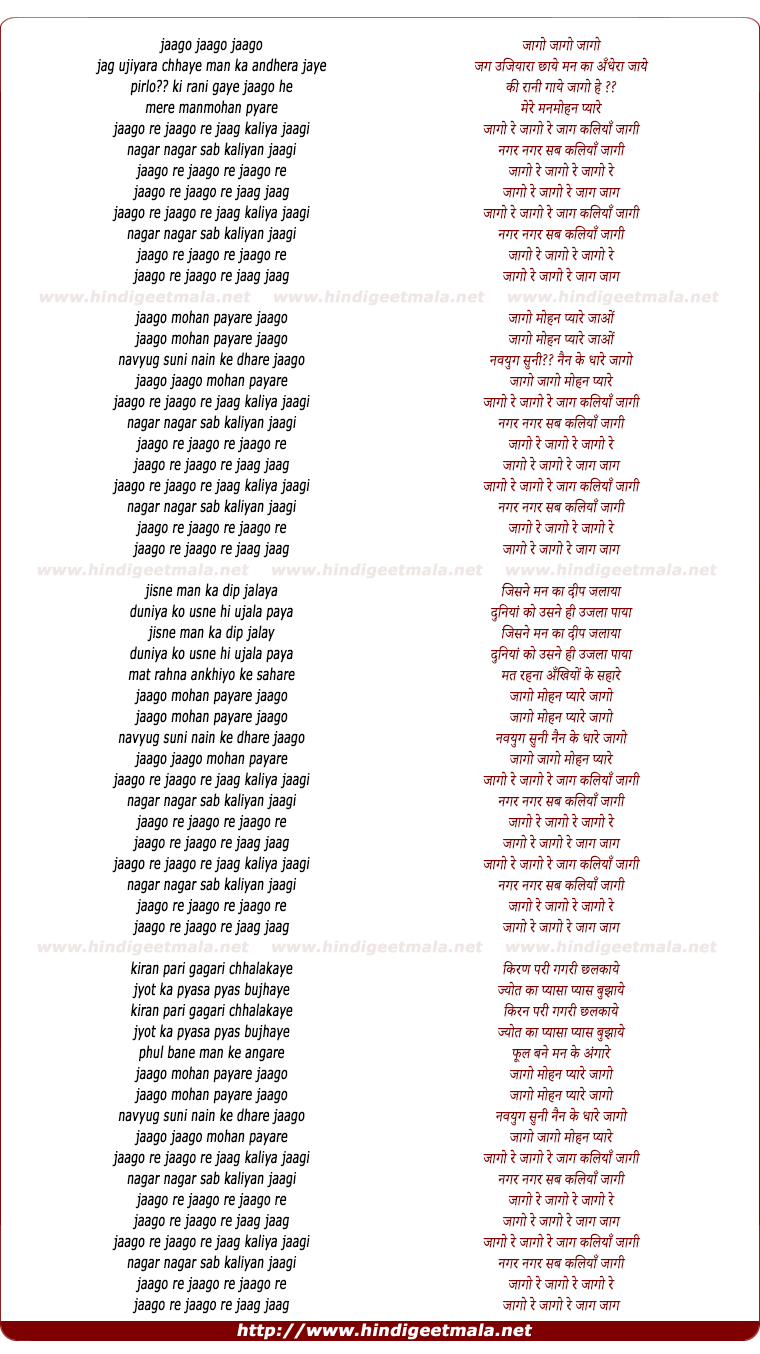 Comments on song "Jaago Mohan Pyaare"
t k mukherjee on Sunday, August 17, 2014
Do not forget the director Shombhu Mitra, a colossus of bengali stage.This
film got the best picture award in aRussian film festival,where Raj Kapoor
was very popular.Hats off to the movie and its creators on and off the
screen.﻿

manwarmoghal on Monday, September 30, 2013
WHAT A R.K'S CLASSIC... SALEEL CHAUDHARY IN CLASSIC. AND HE PROVED.
FILM IS BEST FOR EV THING... TELL ME HOW MANY LINES OF DIALOGUES RK
DELIVERED. STILL HIS ACTING SPOKE IN WHOLE THE FLICK

sonny19xx on Thursday, February 21, 2013
One of the underrated RK movies but the best of the lot. This song is so
uplifting, full of meaning and melodious.Thanks

Sushama Karnik on Wednesday, September 11, 2013
wake up my dear Mohan, the light of the new dawn is kissing your eyes One
must kindle the light of the mind. The one who does it will see the world
in clear light.Don't just see with your physical eye, open the sight of the
heart.The angel of dawn has come with her vessel of light fiilled to the
brim. Those who are thirsting for light can quench their thirst. The
darkness of the mind will vanish now.

Jayant Kunte on Sunday, July 06, 2014
Sushama Karnik's translation is very correct.
But to get the right feeling you need to know the language itself
As regards the song, its timeless. Lata, Salil, Shailendra, Raj & Nargis
every one is at the best. Unparalleled.﻿