Video of this song from youtube
Average Rating : 4.29
Total Vote(s) : 69
Please rate this song between 1 star and 5 stars (5 stars being the best). Just move your mouse on the stars above and click as per your rating. Your rating will really help us to improve our website. 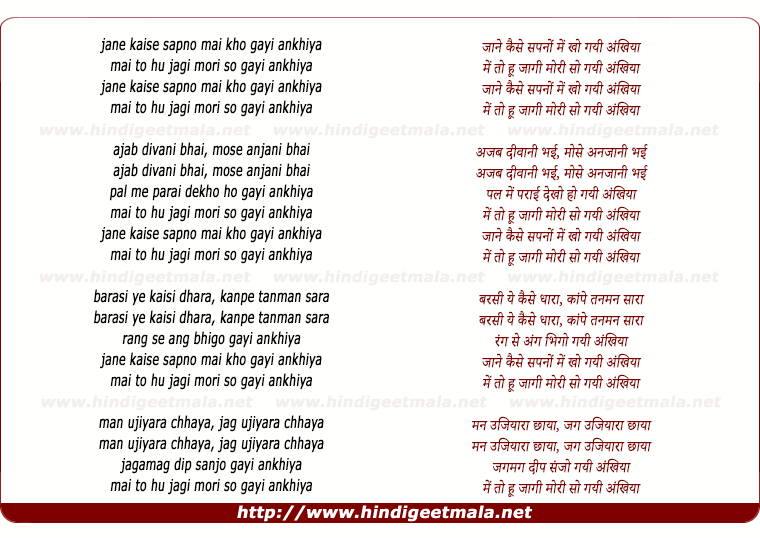 Comments on song "Jaane Kaise Sapanon Main Kho Gayi Ankhiyaan"
sonny19xx on Tuesday, July 13, 2010
this movie was the foray into the world of hindfilms by the genius of ravi shankar. thanks rajshri. what a song . lata pours her heart out. the raag i cant identify. dont know why ravisankar left the scene of hindi films. maybe could not identify himself in this rather nebulous field of film sangeet.
Bharat Gul on Friday, March 16, 2012
The beauty of this song is not only in its rendition by Lataji, but in the
way variant clusters of instruments under Ravi Shankar's baton are
synchronized with the sequence of scenes-- flowers abloom , and the
children enjoying their﻿ merry- go-round, their swing rides and their
glides on the slide. That aural-visual harmony is an extended metaphor for
the feelings stirring in Leela Naidu's heart and calculated to induce
smiles all around. Thanks, Suhanee.

crazyoldsongs on Saturday, March 17, 2012
as soon as the delightful sound waves from this song touch my ear , i feel
my heart starts singing . this song has that ever-joyous effect on a person
and never fails to uplift the spirits ! thank you suhanee for a joyous
aural and visual delight . !:)