Average Rating : 4.34
Total Vote(s) : 85
Please rate this song between 1 star and 5 stars (5 stars being the best). Just move your mouse on the stars above and click as per your rating. Your rating will really help us to improve our website. 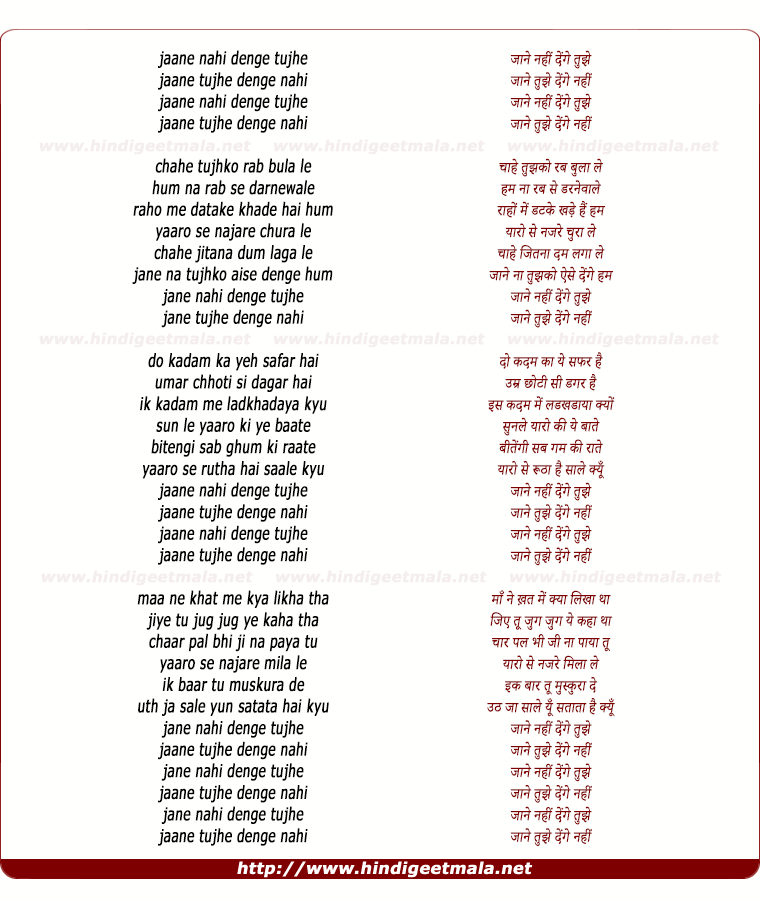 Comments on song "Jaane Nahin Denge Tujhe"
Aw Rae on Friday, July 22, 2011
(jaane nahin denge tujhe we will not allow you to go away jaane tujhe denge
nahin) - (2) will not let you go chahe tujhko rab bulaa le whether God
calls you hum na rab se darne waale we are not going to be afraid of that
god even raahon mein dat ke khade hain hum we are standing firmly in a way
yaaron se nazrein chura le whether you hide your eyes from us (friends)
chahe jitna dum laage le or put any kind of force

xKyir on Monday, January 17, 2011
i did not understand a thing about the song.. but i don't know why when I
watch this clip with the song.. tears keep falling in my eyes.. :') And I
Learned that it doesn't matter whether you understand the song or not but
its the thought that count..

kingman260 on Saturday, December 04, 2010
in fact I'm Egyptian & i was shocked when i saw this fantastic movie.in fact i think it one of the best movies i have ever seen in my life.super production ,so impressive music also i can't understand the song's words and was narrated so well
andreakhan26 on Saturday, July 30, 2011
this song is great, i love the way they portrait true friendship on this
movie... it's a rare opportunity to have friends who will stick with you
all the way and will do everything to help you...a very inspiring movie!

michysatchi on Friday, April 06, 2012
BOLLYWOOD makes a bigbanging movie and after that you dont care for them and after a few moths or year they make another super BIGBANGING movie like this ... im a fan of indian directors now :D
View all 105 comments related to song Jaane Nahin Denge Tujhe
Popular Links on HindiGeetMala