Average Rating : 3.33
Total Vote(s) : 21
Please rate this song between 1 star and 5 stars (5 stars being the best). Just move your mouse on the stars above and click as per your rating. Your rating will really help us to improve our website. 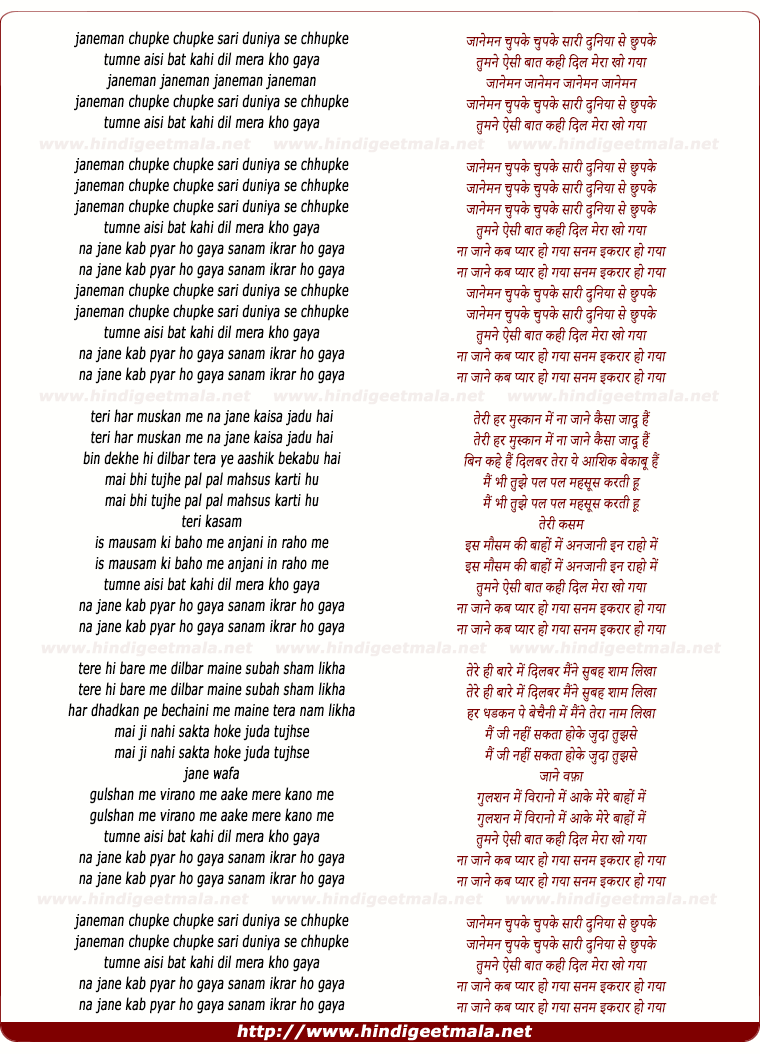 Comments on song "Jaaneman Chupke Chupke"
liverpoolisbest1001 on Thursday, August 08, 2013
Yeah, you are right. Alka is always better than Anuradha. Anuradha suited
for songs in the 80s and also 90s but not in 2000s. Most of Alka's songs
have been given to Anuradha due to some unknown reasons. T-Series is one of
the reason that Anuradha got many songs in her name, movies like Wrong
Number, Hum Tumhare Hain Sanam are some those. Alka refused to work with
T-Series for some years due to Gulshan Kumar's incident earlier. Anyway, I
like both singers.

Blesson Baby on Friday, August 09, 2013
True... Anuradha tried to dub Lata's song also with the Power of Gulshan
Kumar. In ithihas also she dubbed Alka's song. But alka fought and music
director kept both the version. Alka's version become huge hit at that
time. Chaha hai tujko from Mann is superb song, I wish alka could hav sing
this.. Anuradha's pronciation is very bad in this song. The word "Hai",
"tujko" and all... Thats why all music director, choosen alka only later
on.

Blesson Baby on Thursday, August 08, 2013
You know alka is always better than Anuradha.. Alka has a clear
prounciation and sweet voice... In Dil movie all song were recorded by Alka
Yagnik. Later on because of Gulshan kumar, Anuradha played a game n
replaced alka Yagnik.. It could have much much much better for madhuri if
alka yagnik would have sing it...

Blesson Baby on Friday, August 09, 2013
Anuradha was there only because of Gulshan Kumar's Power in T series.
Because Anu Malik, Nadeem Shravan all wanted to make their carier at that
time. So forcefully they have to use Anuradha for their music. Later on
Nadeem Never used Anuradha.