Average Rating : 4.52
Total Vote(s) : 93
Please rate this song between 1 star and 5 stars (5 stars being the best). Just move your mouse on the stars above and click as per your rating. Your rating will really help us to improve our website. 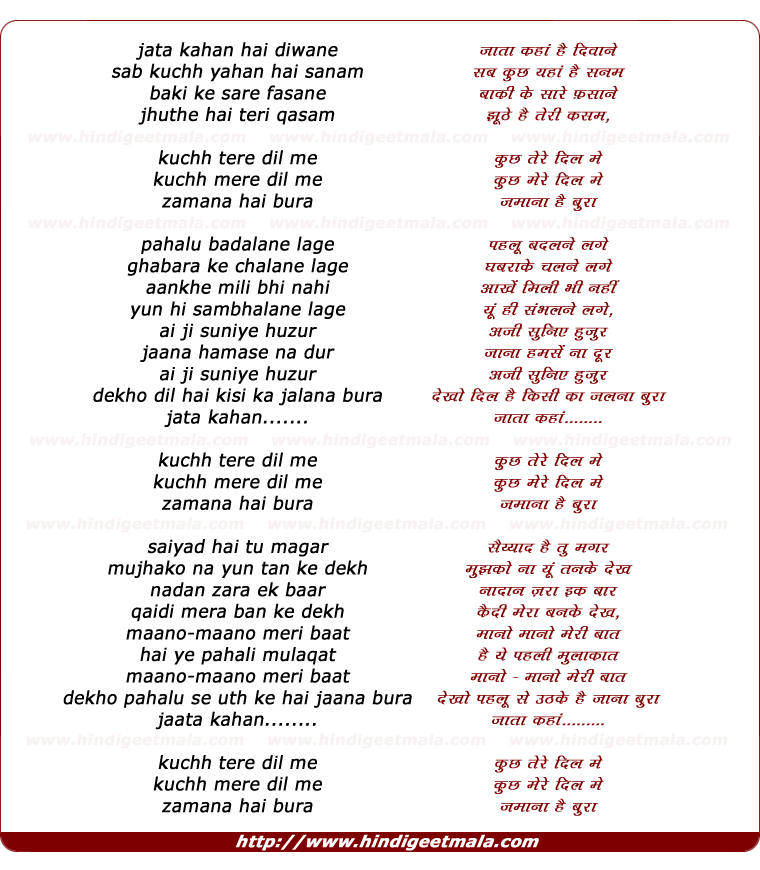 Comments on song "Jata Kahan Hai Diwane, Sab Kuchh Yahaan Hai Sanam"
sonajoy on Friday, December 24, 2010
@oldHFMfan I think she says "fifty" and not "fiffi". The "fifty" probably
implies that their love is shared between them equally -- "fifty (percent)"
in each of them. I may be wrong but that's the meaning I've inferred. But
that's not objectionable at all so I don't see why the song was deleted
from the movie. Other songs that were excluded include "Mai pyar ka rahin
hoon" from Ek Musafir Ek Hasina, "Zulf ki chaon mei chehre" from Phir Wohi
Dil Laaya Hoon. Great songs yet they were cut..

Iqbal Singh Toki on Tuesday, November 04, 2014
This song-cum-dance sequence was picturised on Waheeda Rehman in her first
Hindi film C.I.D. produced by Guru Dutt and directed by Raj Khosla. The
sequence was deleted by the then Censor Board on frivolous grounds. The
song is still heard and popular. It shall be a treat to watch the sequence.
Waheeda Ji can possibly make an attempt to get the sequence restored in the
revised version of C.I.D. and arrange re-release of this film.﻿

SPChitale on Thursday, January 21, 2010
Yhis song takes me back to my schooldays --I was then in 10 th Standard and my very favourite song since then. I can play this song on harmonium quite well since those days . The only matter of regret i s the song is deleted from the movie and because of this was perhaps overshaowed by other beautiful songs from the picture though outstanding in its own right.
ursaheli on Saturday, November 23, 2013
Golden voiced singer Geeta Dutt, along with O.P Nayyar King of melody,
great ever! Fifty kuchh tere dil me fifty, Kuchh mere dil me fifty
zamaanaa hai buraa.
GeetaJi ne ounchi awaz mein gaya thai. In those days, aise gane screen pe
ate the, to sitiyan bajne lagti thi. Thank you meri Jaanu, for the dhamake
dar upload. ﻿


nickkohri on Thursday, March 25, 2010
Only if Guru Dutt's shenanigans had not caused Geeta Dutt to implode. No one can sing this song better than Geeta Dutt - even though this song does not require a wide vocal range! (Mangeshkars included). The sheer personality and character of Geeta's vocals out-classed the monochromatic vocals of the others.
View all 60 comments related to song Jata Kahan Hai Diwane, Sab Kuchh Yahaan Hai Sanam
Popular Links on HindiGeetMala